by yalibnan
578
U.S. net PBS will tonight air Syria Undercover, a documentary featuring covertly shot footage of protesters within the country, made by one of the few Western film crews to gain access to it.
Share: 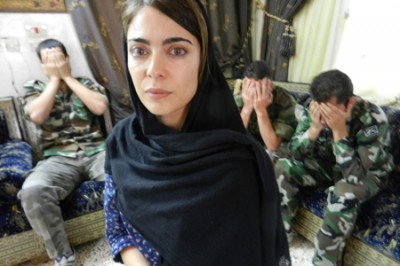 U.S. net PBS will tonight air Syria Undercover, a documentary featuring covertly shot footage of protesters within the country, made by one of the few Western film crews to gain access to it. Reporter Ramita Navai (pictured), who fronts the film, talks to realscreen about the challenges she faced in capturing an uprising.

With governments overthrown in Libya, Tunisia and Egypt; sustained civil disorder in countries such as Yemen and Jordon; and major protests in territories including Algeria and Iraq, the Arab Spring of 2011 has left a momentous and indelible mark on the structure of the Middle East.

Yet the uprising in Syria has proven one of the more difficult for Western reporters and documentarians to cover, thanks largely to the issue of getting access to the country.

So far only a handful of Western filmmakers have managed to sneak in. Among them, Sue Lloyd-Roberts, from the BBC’s current affairs strand “Newsnight,” managed to get herself smuggled into Homs – home to some of Syria’s strongest anti-government protests – to document protests there.

Also gaining access were director Wael Dabbous and reporter Ramita Navai (pictured above with defectors from the Syrian military), who produced Undercover Syria, a Channel 4 film which aired in the UK network’s “Unreported World” strand in October. The doc gets its Stateside premiere tonight (November 8) at 9 p.m. EST on PBS’s “Frontline” strand, under the title Syria Undercover.

According to Navai, “journalists are itching to get in” to the country, but gaining entrance remains the biggest hurdle for Westerners.

“The big problem we faced was that some journalists were getting across through the border with Lebanon, but I found out through some friends of mine in Lebanon that they had closed that border and journalists were being turned away, so they’d realized what was happening,” Navai tells realscreen.

Nevertheless, she and director Dabbous managed to get in by applying for tourist visas; a plan they originally thought would have little chance of success.

“We just got really lucky,” she says. “I think it helps that I’m Middle Eastern and the director-cameraman is originally Lebanese, so it was good cover – we were a rich, Middle Eastern couple on holiday, and they fell for it.”

Once within the country, other problems quickly presented themselves. “The hardest thing was just getting the camera out, just filming,” Navai explains. “Before I went I spoke to a photojournalist who’d been there weeks before I was due to go, and he had said he’d taken a really nice camera and he couldn’t get it out because he was so scared – he only took photos with his iPhone.

“I spoke to another journalist who was doing a tourist thing, and he was arrested simply for taking photos of monuments in downtown Damascus. Everyone is very, very paranoid and very cautious. There are informants everywhere, so we went in with a really small camera and were just really careful. We got it out only when we felt we were safe and embedded with the activists.”

In the film, Navai and Dabbous meet with a number of protesters and rebels, spending time with them in opposition safe-houses and meeting with wounded fighters and activists.

In almost every shot in the film, faces of Syrians are blurred, indicating another challenge the team faced – ensuring that everyone who contributed to the doc would be safe afterwards.

“If we got caught with activists, they would be imprisoned and tortured, and maybe killed – we knew that,” Navai explains. “They made very clear to us the dangers, and that was my biggest worry. So we took every precaution – such as not traveling in the same car as them – to minimize the risk of them being caught with us, because it would be so much worse if they were known to be working with Western journalists.”

She adds, however, that the activists she met with have been “thrilled” with the final film, and although she now most likely cannot return to the country, holds out hope that she will be able to do so if and when President Bashar al-Assad and his government are displaced.

Nevertheless, her short-term prognosis for Syria is not a positive one. “People are getting killed there every day,” she says. “It’s relentless, never-ending violence, and it’s never in the news because nobody can get in there to get this footage out.

“These people [the protesters and activists] aren’t terrorists, however, some of them are starting to arm themselves, and I think that means it’s going to descend into real, bloody violence. I think it’s going to be really long, drawn-out, and bloody.”