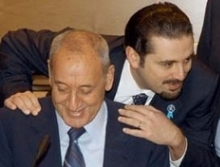 Former Prime Minister Saad Hariri said on his Twitter page in response to Speaker Nabih Berri’s criticism: “Berri is cute and I’ll teach him diving, but it appears that he is not happy about my twits and this makes me very happy.”

Berri criticized Hariri yesterday after the former pm revealed on his Twitter page that if he and his alliance win the next election they will not vote for Berri as the speaker of the parliament.

“No voting for Berri anymore if we win the election. That is a promise,” Hariri said.

Hariri also revealed that he is in Riyadh , Saudi Arabia and he will decide when to return to Lebanon as soon as the time is ripe.

The former PM also tweeted that he was practicing the hobby of diving.

“I just love to dive anywhere, it’s calm under the water, it’s beautiful and I would love to dive all around the world,” he said.

Berri said in a statement on Monday that The Mustaqbal movement leader should have practiced his hobby of diving rather than being involved in politics.”

“Hariri has revealed in his electronic interviews a number of his personal hobbies, one of which is diving,” Berri said .

“The Lebanese have also discovered a new hobby of the ‘sheikh’ which is politics. Better he dive in the former than the latter,” he added.