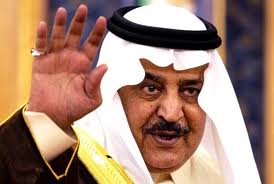 Nayef bin Abdulaziz, Saudi Arabia’s interior minister, has been named the new crown prince of the key oil-producing nation, ascending at a time of regional turmoil amid the populist Arab Spring movement and simmering international issues involving Iran and other neighbors.

The news, following a royal decree signed by King Abdullah, was announced early Friday on state-run Saudi Television. The official Saudi Press Agency reported that the decree was issued the previous evening.

Crown Prince Sultan bin Abdulaziz Al-Saud, the king’s half-brother, died in a New York hospital on Saturday after being ill for some time. His funeral was held three days later in Riyadh.

As was the case with his predecessor, the move makes Nayef bin Abdulaziz the heir to the Saudi throne.

He will assume his new post at a tension-filled time in the Arab world.

The longtime leaders of Tunisia, Egypt and Libya have fallen in recent months during the so-called Arab Spring, while those in Yemen, Syria and elsewhere are holding on to power despite continuing popular unrest.

Violence remains a problem in neighboring Iraq, as well as Afghanistan. Iran, a longtime rival of the Saudi royal family’s, is still at odds with much of the international community over its nuclear program, among other issues.

Before the announcement, Nayef had been considered a likely successor to his brother as crown prince. He was named in 2009 as second deputy prime minister, a post held by the second in line to the throne.

Nayef has served as the Saudi interior minister since 1975, having overseen the kingdom’s counterterrorism efforts.

Saudi Arabia is one of the only countries that has truly dismantled a domestic al Qaeda network, said Christopher Boucek, a Saudi expert at the Carnegie Endowment for International Peace.

“Nayef is widely seen as a hard-line conservative who, at best, is lukewarm to King Abdullah’s reform initiatives,” read a classified U.S. Embassy cable leaked by the website WikiLeaks.

In addition to his new title, Nayef will remain interior minister, according to Friday’s announcement. The Saudi Press Agency noted that he also has been appointed deputy premier, meaning he will officially hold three positions in the Saudi government.

He and others met Thursday with a U.S. delegation that included Vice President Joe Biden, CIA Director David Petraeus and Sen. John McCain.

Ascension to the Saudi throne is kept within the royal family, though it does not pass from father to son. Instead, it’s a complex process, and decisions in the conservative kingdom are often cloaked in secrecy.

Nayef’s appointment follows the first-ever convening of the Allegiance Council, which the king established in 2006 to discuss and allow for more transparency on succession issues.

The king made his decision after receiving their input. Afterward, Abdullah instructed Nayef’s fellow princes to pledge allegiance to him as the new crown prince.