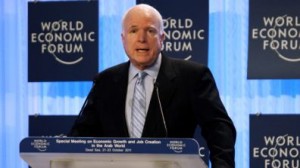 Senator John McCain said Sunday that military action to protect civilians in Syria might be considered now that NATO’s air campaign in Libya is ending.

However, President Barack Obama’s administration has made clear it has no appetite for military intervention in Syria — a close ally of Iran that sits on Israel’s border — and U.S. Secretary of State Hillary Rodham Clinton noted Sunday that the Syrian opposition has not called for such action as President Bashar Assad’s regime.

“Now that military operations in Libya are ending, there will be renewed focus on what practical military operations might be considered to protect civilian lives in Syria,” McCain said at the World Economic Forum in Jordan. “The Assad regime should not consider that it can get away with mass murder. Qaddafi made that mistake and it cost him everything,” he added, referring to ousted Libyan leader Muammar Qaddafi who was captured and killed last week by fighters loyal to the new government.

It was not clear whether the Republican senator from Arizona was referring to American or NATO military action against the Syrian regime, which has waged a 7-month crackdown on opposition protesters and killed about 3,000 people, according to the U.N.

However, international intervention, such as the NATO action in Libya that helped topple Qaddafi, is all but out of the question in Syria. Washington and its allies have shown little inclination for getting involved militarily in another Arab nation in turmoil. There also is real concern that Assad’s ouster would spread chaos around the region.

Syria is a geographical and political keystone in the heart of the Middle East, bordering five countries with which it shares religious and ethnic minorities and, in Israel’s case, a fragile truce. Its web of alliances extends to Lebanon’s powerful Hezbollah movement and Iran’s Shiite theocracy. There are worries that a destabilized Syria could send unsettling ripples through the region.

Most Syrian opposition groups, inside and outside Syria, also have said they oppose military intervention.

Mohammad Habash, a member of Syria’s outgoing parliament, said such military action “will only bring catastrophes, wars and blood and this is what we don’t wish at all.”

U.S. Secretary of State Hillary Rodham Clinton said on “Fox News Sunday” that Washington is “strongly supporting a change from Assad and also an opposition that only engages in peaceful demonstration.” But she stressed that Syria’s opposition has not called for the kind of outside intervention that Libya’s opposition did.

McCain also warned Iran after it was accused in the United States of backing a plot never carried out to assassinate the Saudi Arabian ambassador to the U.S.

“Their plot to assassinate the Saudi ambassador in Washington has only reminded Americans of the threat posed by this regime, how it is killing Americans in Iraq and Afghanistan, supporting violent groups across the region, destabilizing Arab countries, propping up the Assad regime, seeking nuclear weapons, trampling on the dignity of Iran’s people.”

Iran has maintained its backing for Assad’s regime, but has increasingly urged him to halt attacks on protesters and open dialogue seeking to end the unrest. Tehran has dismissed the U.S. allegations of the plot as “baseless” and has said it was willing to examine hard evidence that the U.S. claims links Tehran and the foiled assassination conspiracy.

Iranian officials have rejected tough talk from Washington as “rhetoric,” saying the U.S. is not in a position to attack the Islamic Republic. The country regularly holds war games to showcase its capabilities in defending its nuclear facilities from possible attack.

“No issue unifies the American people more than the need to protect our friends, our allies, our interests from the comprehensive threat posed by the Iranian regime. No one should test our resolve in this matter,” McCain said.

“Not to say that American leadership is neither welcomed nor wanted in the Middle East today. To the contrary, as I travel across this region, I have met with heads of state, young democratic activists business leaders and nearly every single one wants more American leadership and not less.”