Gaddafi salted away about $200 billion 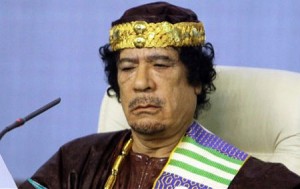 Muammar Gaddafi secretly salted away more than $US200 billion in bank accounts, real estate and corporate investments around the world before he was killed, according to senior Libyan officials.

That’s about $US30,000 for every Libyan citizen and double the amount that Western governments previously had suspected.

The new estimates of the deposed dictator’s hidden cash, gold reserves and investments are “staggering”, one person who has studied detailed records of the asset search said Friday.

“No one truly appreciated the scope of it.”

If the values prove accurate, Gaddafi will go down in history as one of the most rapacious as well as one of the most bizarre world leaders, on a scale with the late Mobutu Sese Seko in the Democratic Republic of Congo or the late Ferdinand Marcos in the Philippines.

Revelation of the stunning size of the portfolio may stir anger among Libyans-about one-third of whom live in poverty.

And it is likely to spur an effort to return the money to Libya’s transitional government, which says it wants to embark on ambitious plan to modernise the country after nearly 42 years of rule by Gaddafi’s whim.

During his 42 years in power, Gaddafi steered aid and investments to benefit his own family and tribe, but he denied support for much of the country, especially the eastern region that historically resisted his family’s despotic grip on power.

Gaddafi’s death after he was captured by revolutionary fighters Thursday outside his birthplace, the coastal town of Sirte, not only ended the armed uprising that erupted last February; it also sets the stage for other governments to begin repatriating a bonanza in sequestered assets to the oil-rich but cash-poor nation.

Obama administration officials were stunned last spring when they found $US37 billion in Libyan regime accounts and investments in the United States, and they quickly froze the assets before Gaddafi or his aides could move them.

But subsequent investigations by American, European and Libyan authorities determined that Gaddafi secretly sent tens of billions more abroad over the years and made sometimes lucrative investments in nearly every major country, including much of the Middle East and Southeast Asia, officials said Wednesday.

Most of the money was under the name of government institutions such as the Central Bank of Libya, the Libyan Investment Authority, the Libyan Foreign Bank, the Libyan National Oil Corp and the Libya Africa Investment Portfolio.

But investigators said Gaddafi and his family members could have had access to any of the money if they chose to.

Libya has the largest proven oil reserves in Africa.