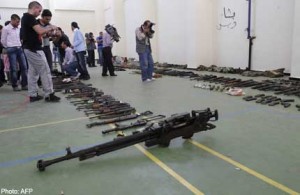 As the revolt in Syria drags on, experts say weapons smuggling into the country has flourished, especially from Lebanon, with automatic weapons, grenades and hunting rifles in high demand.

They say that those behind the trafficking are smugglers in search of quick profits rather than political parties backing protesters against the Alawite-dominated regime in Syria.

“Smuggling networks that for years have operated along Syria’s borders seem to have turned to weapons trafficking in recent months,” said Peter Harling, a Damascus-based expert with the International Crisis Group.

“It appears that a market has quickly developed in a country which, contrary to Lebanon, Iraq, Yemen or Libya, had few weapons circulating beforehand,” he told AFP.

He said the smugglers were motivated by money, at least for the time being.

“I don’t think that at this point we can say, as the Syrian regime claims, that foreign powers are playing a significant role in this,” Harling said.

“People on both sides in Syria are buying weapons to defend themselves,” he added.

“Residents in Alawite villages are arming themselves for fear of reprisals and the (mainly Sunni Muslim) opposition is increasingly doing the same given the regime’s harsh crackdown against any form of protest.

“So the temptation for people to defend themselves is growing.”

A Western diplomat in Beirut who did not wish to be identified confirmed that weapons smuggling from Lebanon into Syria was on the rise but also stressed he believed this was the work of individuals rather than parties.

“Those sending weapons may sympathise with a certain party but you can’t say that a political faction as such is behind the smuggling,” the diplomat said.

He noted the situation was ironic given that for years weapons had been smuggled from Syria into neighbouring Iraq and Lebanon. “The tables are turned now, and it’s a case of the biter getting bitten,” he said.

Since the outbreak of the Syrian uprising in mid-March, Damascus has accused loyalists of former Lebanese premier Saad Hariri, a Sunni, of sending cash and weapons to the opposition in Syria.

Hariri has denied the allegations.

Lebanese authorities have arrested a number of Lebanese and Syrian nationals on charges of weapons smuggling. A judicial official said the arms seized in those cases were either hunting rifles or light weapons.

The smuggling has led to a hike in prices on the black market, notably for hunting rifles, automatic weapons and grenades.

“The Syrians are raking in all the weapons and driving up prices,” said one licensed weapons dealer who did not wish to be identified.

He added that much of the weapons on the black market in Lebanon date back to the country’s 1975-1990 civil war or were smuggled in from Iraq following the 2003 US-led invasion.

An underground weapons dealer in north Lebanon, also on condition of anonymity, said the price of a used Kalashnikov assault rifle has risen from $800 (S$1,000) to $1500 (1079 euros) since the Syria uprising began.

The price of a grenade has also doubled, from about $5 to more than $10, he added, while rocket-propelled grenades are now fetching $200 a piece as opposed to $70 previously.

“There is high demand for Kalashnikovs and ammunition as well as pump-action shotguns which usually come from Turkey and are sold for $500, compared to $200 normally,” he said.

He said the weapons are smuggled by foot or by car through remote areas along the 330-kilometre (205-mile) border between Lebanon and Syria.

“There are more than 50 illegal crossings between the two countries and there is no way to station enough troops to control them all,” said retired Lebanese army General Elias Hanna.

The Western diplomat said that the militant group Hezbollah, a staunch supporter of Assad and a key player in the Beirut government, had boosted its presence along the border in the eastern Bekaa region to stem the smuggling.

The Syrian army has also stepped up security along the border.

Hanna said that while the arms being smuggled into Syria at this point were light weapons and unlikely to upset the current balance of power, the situation could change if neighbouring countries decided to arm the opposition.

“When countries like Turkey change their stand and allow the transfer of heavy weapons through the border, then the balance of power will change,” he said. “But I don’t think this is going to happen any time soon.”