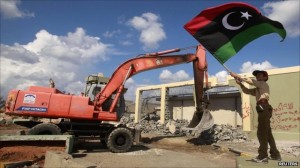 Interim leaders said it was time “to tear down the symbol of tyranny”.

For days, anti-Gaddafi forces have tried to crush pockets of resistance in Gaddafi’s home town, Sirte.

The whereabouts of the fugitive leader are unknown, but a pro-Gaddafi TV station has acknowledged that Col Gaddafi’s son Khamis has been killed.

The Facebook account of the Syria-based al-Rai network said he was killed on 29 August in Tarhunah, south-east of Tripoli.

The report cannot be confirmed and there have been false reports of the death or capture of senior Gaddafi figures in the past.

In Tripoli, senior army officer Ahmad Ghargory said the Bab al-Aziziya area would be turned into a public park.

“It’s the revolutionary decision to tear down this symbol of tyranny,” he said.

“We were busy with the war, but now we have the space to do this.”

Correspondents say local people have already turned a courtyard, from where Col Gaddafi once made fiery speeches, into a weekly pet market.

The compound was a regular target for Nato air strikes following the UN resolution that allowed a foreign coalition to protect civilians from Libyan government forces.

Fighters loyal to the National Transitional Council (NTC) forced their way into the area on 23 August during fierce fighting for the capital.

In the embattled city of Sirte, NTC troops have so far failed to dislodge a few hundred pro-Gaddafi fighters still holed up in the centre of the city, vowing to fight to the bitter end.

The BBC’s Wyre Davies in Sirte said on Sunday there had been an attempt to co-ordinate the assault with fighters from Misrata in the west told to hold their positions while troops from Benghazi in the east tried to take ground in the city centre.

However, the situation is chaotic and violent, he adds.

At one point the BBC team in Sirte came under heavy sniper fire and a young Libyan nearby was shot dead as they dived for cover.

As the fighting continues, the NTC is struggling to exert its authority over the country.

There have been reports of widespread looting by fighters around Sirte, with witnesses saying truckloads of stolen goods are being driven away.

Reporters from Associated Press TV said they saw trucks loaded with everything from tractors and heavy machinery to rugs, freezers, furniture and other household goods being driven off.

A few days ago a gun battle broke out in Tripoli between forces loyal to the NTC and gunmen they say support Col Gaddafi.

It was the first serious confrontation in Tripoli since the city fell in August.

The fighting started after a demonstration by Gaddafi loyalists. BBC