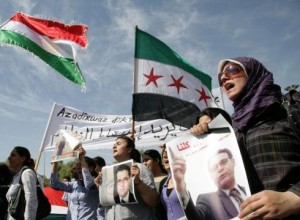 Beirut, Lebanon – More than 50,000 mourners marched through the capital of Syria’s Kurdish heartland Saturday in a funeral procession for one of the country’s most prominent opposition figures a day after his assassination. Security forces fired into the crowds, killing five people, witnesses said.

The turnout was by far the largest in the Kurdish northeast since the start of the uprising against President Bashar Assad’s autocratic regime seven months ago.

But it remains to be seen whether Friday’s slaying of charismatic Kurdish opposition figure Mashaal Tammo will trigger a sustained, large-scale outpouring by Syria’s Kurds that might bolster the wider uprising against Assad taking place across the nation.

Despite the gunfire, crowds pouring into the streets of Qamishli called on Assad to step down, chanting, “Leave! Leave!” — adopting the cry used by tens of thousands of other Syrian protesters during the uprising. Some demanded Assad’s execution; others ripped down a statue of his late father and predecessor, Hafez Assad.

Tammo was killed Friday by masked men who burst into an apartment and gunned him down.

“All of Qamishli is out today. The funeral is turning into a massive protest,” Kurdish activist and lawyer Mustafa Osso told The Associated Press by telephone. The grieving cries of fellow mourners could be heard in the background.

Members of the Kurdish ethnic minority — Syria’s largest — have long complained of neglect and discrimination. Assad granted citizenship in April to stateless Kurds in eastern Syria in an attempt to address some of their grievances in the face of the swelling anti-government uprising that began the month before.

While many Kurds — who make up 15 percent of the country’s 23 million people — have been taking part in the anti-government protests, Kurdish groups have yet to put their full weight behind the revolution.

If they do, their numbers could significantly reinforce the protest movement. Syria’s security forces already have their hands full in trying to stamp out dissent across much of the rest of the country.

A Syrian opposition figure said many Syrians were pinning their hopes on the Kurds joining the revolution. But he said Arab-Kurdish ethnic sensitivities might keep them from doing that.

“There is a mutual lack of trust between the two sides; the Kurds are worried. They already feel excluded from the decision making process and they fear for the future,” he said on condition of anonymity, because of the sensitivity of the subject.

Outrage over Tammo’s killing spilled over the border into Iraq’s Kurdish region.

“The assassination of Mashaal Tammo is evidence of the barbaric nature of the Syrian regime,” the spokesman of the Syrian Left Party, Nooreddin Othman, told the AP in a phone interview.

Tammo’s slaying was also significant because he was the most prominent person to fall victim to a recent string of targeted killings that has raised concern Syria may be sliding toward civil war.

Other signs of growing disorder include fierce gunbattles between army units and fellow soldiers who have defected to join the opposition. There are also signs that some of the protesters, who have remained largely peaceful, are taking up arms to defend themselves from regime attacks.

The crowd of mourners in Qamishli Saturday swelled to more than 50,000 people, Osso said.

Security forces fired on the crowd, killing five mourners and wounding several others, he said.

An activist network called the Local Coordination Committees also said five people were killed and several others were injured in the gunfire. The group said the city has been completely shut down after a general strike was declared to mourn Tammo.

Security forces also fired on a funeral procession in the Damascus suburb of Douma for three people killed a day earlier, activists said. A 14-year-old boy was killed and 10 other people were wounded, according to the Local Coordination Committees and the London-based Syrian Observatory for Human Rights.

Tammo, a 53-year-old former political prisoner, was a spokesman for the Kurdish Future Party. He was also a member of the executive committee of the newly formed Syrian National Council, a broad-based front bringing together opposition figures inside and outside the country in an attempt to unify the deeply fragmented dissident movement.

A vocal regime opponent, Tammo had been instrumental in organizing anti-government protests in Qamishli in recent months.

It was not clear who carried out the killing. Some in the opposition said the regime was responsible for his assassination. Osso said Tammo had no enemies and blamed security forces, but others noted there was a power struggle between him and rival Kurdish parties.