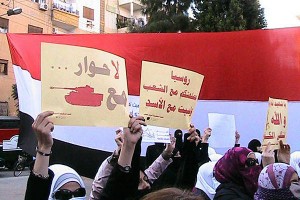 A Syrian opposition leader accused Russia and China of putting their economic interests first and showing “hostility” toward the Syrian people by blocking a United Nations resolution demanding an end to violence.

The stance of Russia and China, which on Oct. 4 scuppered a U.S. and Europe-backed motion condemning President Bashar al- Assad’s crackdown on protests, will be reciprocated across the Arab world, Faruk Tayfur, deputy chairman of the Syrian National Council formed in Istanbul this month, told Turkey’s state-run Anatolia news agency. Russia sells weapons to Syria and maintains a naval base there.

Syrian opposition leaders will travel to Egypt this weekend, and there are plans to visit other countries to gain recognition as Syria’s representatives, said Tayfur, who fled the country in 1975 and said he hasn’t returned since.

Activists estimate that at least 3,600 people have died and tens of thousands have been detained during seven months of protests in Syria. Opposition leaders have been meeting in Turkey and on Oct. 2 said they created a council, including the Muslim Brotherhood, to coordinate efforts to end Assad’s rule.

The United Nations Human Rights Council is meeting in Geneva today for a quadrennial discussion of Syria’s record. A coalition of activists and rights groups sent a draft resolution to all UN member states calling for the creation of a special UN monitor of human rights in the country, said Geneva-based UN Watch, a non-government organization coordinating the effort.

The Syrian government’s submission to the UN council on the country’s human rights record is “fictional” and “insulting to the memory” of Syrians killed in Assad’s crackdown, Hillel Neuer, executive director of UN Watch, said in an e-mailed statement.

The Syrian government has blamed the violence on terrorists encouraged by its foreign enemies.

Tayfur praised Turkey’s decision to press ahead with more sanctions against Assad’s government even after the failure of the UN measure. A former Syrian colonel, Riad al As’ad, fled to Turkey after forming the opposition Free Syria Army, according to Anatolia.

Turkish Prime Minister Recep Tayyip Erdogan called the veto of the Security Council resolution “unfortunate.” The premier canceled a trip to Turkey’s southeastern province of Hatay, where more than 7,600 Syrian refugees are staying, after his mother died today, Anatolia reported.