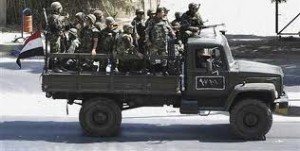 “At around 2:30pm Beirut time (1130 GMT), in an area called Saaba, next to Arsal, Syrian troops entered Lebanese territory and opened fire on farmer Ali al-Khatib, a Syrian national,” the official said on condition of anonymity.

“His body is still on site and a probe is under way.”

He said Khatib was married to a Lebanese and lived in the area, where the border is not clearly delineated.

A government official, also speaking on condition of anonymity, confirmed the incident and said it was unclear why Khatib was targeted or how he was killed.

“The area in question is very remote and right along the border,” he said.

Earlier this week, Syrian tanks entered the same region in a brief incursion that raised fears of the revolt against the regime in Damascus spilling over into Lebanon.

An estimated 5,000 Syrians have sought refuge in Lebanon in recent months, among them deserting soldiers.