Houri: Arsal incident confirms the Syrian identity of the cabinet 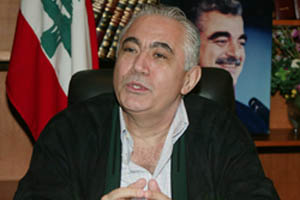 March 14 MP Ammar Houry said on Thursday “what we’ve seen in the Bekaa town of Arsal confirms the Syrian identity of this government. ” He slammed the cabinet for ignoring the violations of the Lebanese territory by the Syrian army during its Wednesday ‘s session.

Syria’s envoy Ali Abdel Karim Ali was asked yesterday about the incursion of the two Syrian army tanks into the Lebanese village of Arsal earlier on Tuesday, he claimed that “he did not hear about this incident,”but then added :“There is full cooperation with the Lebanese army regarding chasing criminals ( read dissidents) .”

Houri’s remarks were made after another Syrian patrol crossed the Lebanese borders, but this time in the North which triggered panic among residents.

This incident follows another in the Bekaa , which took place on Tuesday. Syrian army tanks crossed the Lebanese border near the town of Aarsal and fired several gunshots within Lebanese territory.