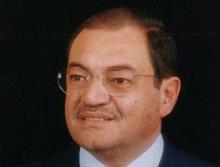 Lebanon’s Defense Minister Fayez Ghosn tried to justify Syrian army violations of Lebanese territories by saying :” Those complaining about the Syrian move should be reminded about the daily Israeli land, maritime and airspace violations.”

that unlike the US, Lebanon does not support the opposition in Syria.

“The US wants to support the Syrian opposition, but we don’t ,” Ghosn told Al-Manar TV after meeting with US Ambassador to Lebanon Maura Connelly.

“During the meeting with Connelly expressed her stance and I expressed mine; our positions were contradictory.”

Ghosn said that the Syrian army’s incursion into Lebanon “is being investigated in order to find out what happened !”

Another Syrian patrol crossed the Lebanese borders, but this time in the North which triggered panic among residents.

This incident follows another in the Bekaa , which took place on Tuesday. Syrian army tanks crossed the Lebanese border near the town of Arsal and fired several gunshots within Lebanese territory.

March 14 MP Ammar Houry said on Thursday “what we’ve seen in the Bekaa town of Arsal confirms the Syrian identity of this government. ” He slammed the cabinet for ignoring the violations of the Lebanese territory by the Syrian army during its Wednesday ’s session.