Clinton: Russia, China have to explain their vetoes to the Syrian people. 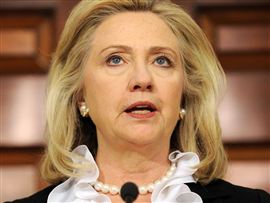 US Secretary of State Hillary Clinton said on Wednesday that the U.N. Security Council failed its duty by not passing a resolution on Syria and said Russia and China would have to explain their vetoes to the Syrian people.

“We believe the Security Council abrogated its responsibility yesterday,” Clinton told reporters, saying the measure vetoed by Russia and China represented the “bare minimum” of what the international community should do in response to the bloody crackdown by Syrian President Bashar al-Assad.

“The countries that chose to veto the resolution will have to offer their own explanations to the Syrian people, and to all others who are fighting for freedom and human rights around the world,” Clinton said in the Dominican Republic, where she was on an official visit.

Russia and China, which with the United States are veto-wielding permanent members of the Security Council, on Monday blocked a European-drafted resolution urging Syria to halt its six-month crackdown on pro-democracy protesters.

The vote came after months of disagreement between the United States and European council members on the one hand and Russia, China, Brazil, India and South Africa on the other about how to deal with Syria, where the United Nations estimates that at least 2,700 civilians have died since the crackdown began in March.

“The United States and our European allies have made very clear where we stand on this issue,” Clinton said, adding what appeared to be a veiled reference to past Russian and Chinese weapons sales to the Assad government.

“Those countries that continue to send weapons to the Assad regime that are turned against innocent men, women and even children, should look hard at what they are doing,” Clinton said.