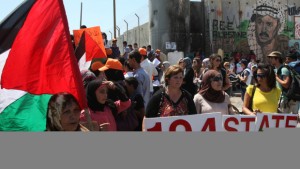 U.S. Defense Secretary Leon Panetta warned Sunday that Israel is becoming increasingly isolated in the Middle East, and said Israeli leaders must restart negotiations with the Palestinians and work to restore relations with Egypt and Turkey.

In a blunt assessment made as he was traveling to Israel, Panetta said the ongoing upheaval in the Middle East makes it critical for the Israelis to find ways to communicate with other nations in the region in order to have stability.

“There’s not much question in my mind that they maintain that (military) edge,” Panetta told reporters traveling with him. “But the question you have to ask: Is it enough to maintain a military edge if you’re isolating yourself in the diplomatic arena? Real security can only be achieved by both a strong diplomatic effort as well as a strong effort to project your military strength.”

Panetta is scheduled to meet this week with Israeli and Palestinian leaders, and then travel to a meeting of NATO defense ministers in Brussels. His visit comes as Mideast negotiators push for a peace deal by the end of next year, amping up pressure for the resumption of long-stalled talks.

The Pentagon chief said Israel risks eroding its own security if it does not reach out to its neighbors.

“It’s pretty clear that at this dramatic time in the Middle East, when there have been so many changes, that it is not a good situation for Israel to become increasingly isolated. And that’s what’s happening,” he said.

Panetta said the most important thing now is for Israel and its neighbors “to try to develop better relationships so in the very least they can communicate with each other rather than taking these issues to the streets.”

His visit comes at a particularly critical and fragile time.

Palestinian President Mahmoud Abbas has asked the U.N. Security Council to recognize an independent Palestinian state in the West Bank, east Jerusalem and Gaza Strip, areas captured by Israel in the 1967 Mideast war. The United States opposed the U.N. bid, saying there is no substitute for direct peace negotiations. But with Israel continuing to build settlements in the West Bank and east Jerusalem, Abbas says there is no point in talking.

Some 500,000 Jewish settlers now live in the West Bank and east Jerusalem. Israel withdrew from Gaza in 2005.

The United States, Britain, France and other council members are likely to try to hold up consideration of the application while they press for a resumption of long-stalled Israeli-Palestinian negotiations, diplomats said.

Negotiators, known as the Quartet, are asking both the Israelis and the Palestinians to produce comprehensive proposals on territory and security within three months.

Israeli officials have welcomed parts of the proposal, but have also expressed concerns about the timetable for some discussions. They also have refused to endorse the 1967 prewar borders as a basis for the future Palestinian state — something President Barack Obama has endorsed.

The Palestinians, meanwhile, have said they won’t return to talks unless Israel freezes settlement building and accepts the pre-1967 war frontier as a baseline for talks.

The Quartet — the U.S., European Union, United Nations and Russia — is urging both sides to avoid “provocative actions.” Just last week, Israel approved the construction of 1,100 new housing units in an area of Jerusalem built on land captured in 1967, a move that drew widespread international condemnation.

Panetta said he wants to stress to both sides that instead of setting conditions or pursuing other approaches, “the most important thing they can do is go to the negotiating table. That would be a tremendous signal to the world that both the Israelis and the Palestinians want to try to find a solution to these problems. I don’t think they really lose anything by getting into negotiations.”

His visit to Israel comes six months after his predecessor, Robert Gates, traveled to the region to meet with Israeli leaders and make the first journey to the West Bank to talk with Fayyad

The U.S. has said it would veto the Palestinians’ U.N. request, despite the high political cost in the Arab world. However, Washington would not need to use its veto if the Palestinians fail to get the support of at least nine of 15 council members. Palestinian officials have said they believe they have eight yes votes, and are lobbying for more support.

Photo: Palestinian women wave national flags during a protest calling for a Palestinian state with full UN membership at the Qalandia Israeli checkpoint in the West Bank, near Ramallah, on September 17, 2011. (Getty Images)