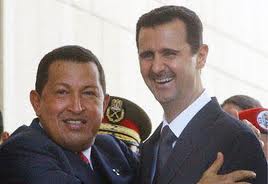 Chavez — who has inherited Fidel Castro’s mantle as Washington’s main irritant in Latin America — views the wave of uprisings in the Arab world as Western-led destabilization and has been a strong ally of Gaddafi.

“The Libyans are resisting the invasion and aggression. I ask God to protect the life of our brother Muammar Gaddafi. They’re hunting him down to kill him,” he said.

“No one knows where Gaddafi is, I think he went off to the desert … to lead the resistance. What else can he do?”

With a presidential vote looming for Venezuela in 2012, Chavez’s opponents have leapt on his support for Arab strongmen — and friendship with Gaddafi — as a sign of autocratic tendencies. But he has been undeterred and also sent support to the government of Syria, which is fighting street protests.

“I spoke yesterday with the president of Syria, our brother President Bashar al-Assad,” Chavez said in a televised ceremony to present low-cost household appliances for Venezuelans.

“From here, we send our solidarity to the Syrian people, to President Bashar. They are resisting imperial aggression, the attacks of the Yankee empire and its European allies.”

Latin America’s ALBA block of leftist nations would soon send a mediation team to Syria to try and help promote a negotiated solution to the unrest, Chavez added. “This warlike madness is intended by (U.S.) President (Barack) Obama and his imperial allies to destroy the Syrian people,” he said.

The 57-year-old Chavez, who has led his South American OPEC member nation since 1999, spoke at length in several public appearances Saturday that were a further sign of vitality despite four sessions of chemotherapy for cancer treatment.

Earlier in the week, Chavez, who has shaved his hair and seen his face swell during chemotherapy, tossed a baseball in front of TV cameras to mock a U.S. media report that he was having emergency treatment in hospital.

“I have quite a surprise for those who want me dead and go round saying I’m in hospital, I’m paralyzed, I can’t talk,” he said. “I keep getting better, I’m stronger every day.”

As usual, Chavez could not resist a pop at a growing group of opposition leaders planning to fight a February primary among their coalition to pick a unity candidate to fight him at the presidential election on October 7, 2012.

The socialist leader seeks to depict them as pro-U.S. representatives of Venezuela’s rich elite who are out of touch with the poor majority in the nation of 29 million people.

“They are all capitalists, defending the system that his sinking the world.”

Critics say Chavez’s anti-U.S. diatribes and constant comments about his health are conveniently obscuring a litany of problems in Venezuela ranging from housing shortages and power-cuts to runaway inflation and untamed crime.

“All this talk about cancer seems intended to attract votes, at least of the sympathy variety, and perhaps distract attention from serious problems in governance,” wrote U.S.-based political scientist Javier Corrales.