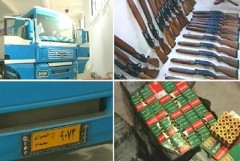 The Syrian Arab News Agency (SANA), a Government owned organization reported late Thursday that Syrian authorities at the country’s Jdeidet Yabous border crossing seized a large amount of weapons and ammunition being smuggled in from Lebanon.

‘The truck smuggling the arms had an Iraqi license plate No. 0/9073 and was loaded with fruit ,’ the news agency said. ‘Authorities found 125 machine pump-action shotguns and more than 30,000 bullets for pistols secretly hidden in the truck’s floor.’

Earlier Thursday, the Lebanese Army seized five small trucks believed to be smuggling goods into Syria through the eastern Lebanese town of Deir al-Ashaer. The Lebanese command did not say if the smuggled goods included weapons.

The Lebanese daily As Safir quoted a judicial source as saying Thursday that a Lebanese and two Syrians were caught this week trying to smuggle arms into Syria to support anti-regime protesters there.

Since the beginning of the Syrian uprising in mid-March, Syrian officials have accused loyalists of Lebanese former premier Saad Hariri, a Sunni Muslim, of helping the opposition in Syria by giving them money, mobile phones and arms. Hariri has denied the allegations.