by yalibnan
2485
Zainab Alhusni was a simple seamstress in Syria, well-loved by all her neighbors and friends. Now, in a tragic turn of events, she has become a symbol of the cruelty gripping that conflict-wracked nation.
Share: 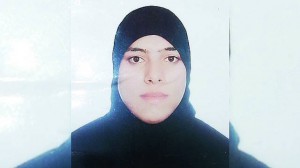 Zainab Alhusni was a simple seamstress in Syria, well-loved by all her neighbors and friends. Now, in a tragic turn of events, she has become a symbol of the cruelty gripping that conflict-wracked nation.

Alhusni was only 18 when she stepped away from her Homs residence last month to buy groceries. Her family never again saw her alive. She was whisked away by Syrian security forces to coax the surrender of her activist brother, and ended up beheaded and dismembered, a neighbor, activists and human rights groups say.

Waleed Fares, a neighbor and family friend, told CNN on Monday that Zainab’s father died when she was just a toddler, leaving her mother and three siblings to fend for themselves in a country with often-unfavorable conditions for a single mother. All four children dropped out of school at a young age so they could work as laborers to provide for their family, Fares said.

Zainab dreamed of owning her own tailor shop, so she could support her impoverished family, he said. But she never had a chance to fulfill that dream.

Her older brother, Mohammed, became a well-known activist in the family’s hometown of Homs in western Syria, often leading the demonstrations against embattled Syrian President Bashar al-Assad and treating the wounded.

“Protesters would carry Mohammed on their shoulders so he could lead the chants,” Fares said. “He was very loved by everyone. The protesters even had a chant they would say for him, using his nickname: ‘Abu Ahmed, may Allah protect you!'”

Security forces pursued Mohammed Alhusni for months, raiding his family’s home several times, causing the family to flee to a nearby neighborhood on July 25, Fares said.

On July 27, Zainab Alhusni disappeared, leaving her family devastated and her siblings panicked and anxious, the neighbor said.

“If it had been her brother it would have been different. Taking Zainab, it became a matter of family honor and family pride. Her mother was beyond depressed. She seemed to be between life and death,” Fares said.

Neighbors and family friends called on each other to collect donations to ease the family’s financial troubles, but this became the least of the Alhusni family’s concerns.

Several days after Zainab disappeared, security forces called the family and offered to meet them in a pro-Assad neighborhood where they would trade Zainab for her activist brother.

“The family did not trust the security forces. They would not even confirm to them that Zainab was alive, and they all believed it was a trap to take Mohammed, too,” Fares said.

On September 10, the family says, Mohammed was wounded in a demonstration. He came back to his loved ones a corpse. The family believes he was tortured to death.

In a statement posted to YouTube, another brother, Yousif Alhusni, describes multiple gunshot wounds to Mohammed’s chest and a single shot through his mouth.

“His arms were broken and there were cigarette burns to his face,” he adds.

The family went to collect Mohammed’s body from a hospital when doctors told them another unclaimed body with the label “Zainab Alhusni” had been kept in the morgue’s freezer for some time.

When the family received the body, her head and arms had been chopped off. Chunks of her flesh were charred, appearing in places to have been melted or burned down to the bone.

Authorities forced Zainab’s mother to sign a document saying both her daughter and her son had been kidnapped and killed by an armed gang, Amnesty International said in an online statement

“If it is confirmed that Zainab was in custody when she died, this would be one of the most disturbing cases of a death in detention we have seen so far,” said Philip Luther, Amnesty International’s deputy director for the Middle East and North Africa.

The case also drew the antipathy of the U.N. Office of the High Commissioner for Human Rights, which characterized the incident as “appalling” and an example of the “targeting and attacking of families and sympathizers of the protesters by security forces.”

The ferocious Syrian government crackdown against dissenters began in mid-March when anti-government protests unfolded. The number of people killed over the past six months has reached at least 2,700, according to the U.N. human rights office. Some activist groups put the toll at around 3,000.

Syrian authorities could not be reached for comment on the Alhusni case. The Syrian government has maintained armed gangs with foreign agendas, not the regime, are responsible for the violence that has plagued the Arab country for months.

CNN cannot independently verify the authenticity of the video, the claims, or the death toll because the government has repeatedly denied requests for journalists to report inside Syria.

The neighborhood where the family lived, Bab Alsibaa, held a rally for Zainab on Sunday, and people vowed the brutality that destroyed the Alhusni family could only strengthen their resolve.

“The case of Zainab Alhusni is not just for our town, or province, or even for the country of Syria. It is a human rights issue that should bring the attention of the world,” Fares said.

But despite Fares’ insistence that “after Zainab our chants are louder, our numbers greater,” he admitted the people of Bab Alsibaa constantly worry about their female family members.

“Even stepping outside the home is a risk for women now,” he said.