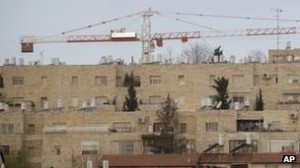 Israel has approved the construction of 1,100 homes in the Jewish settlement of Gilo on the outskirts of Jerusalem.

The US has repeatedly urged Israel to stop building settlements on occupied Palestinian land.

Almost 500,000 Jews live in settlements on occupied territory. The settlements are illegal under international law, though Israel disputes this.

US-brokered peace talks between Israel and the Palestinians are deadlocked over the issue of Jewish settlements in the occupied West Bank and East Jerusalem.

The latest plan includes the construction of small housing units, public buildings, a school and an industrial zone, according to the Ynet news website.

The authorities have now approved the building of almost 3,000 homes in Gilo over the past two years.

The US and United Nations criticised earlier announcements of building projects.

Israel built the settlement at Gilo on land it captured in 1967. It later annexed the area to the Jerusalem municipality in a move not recognised by the international community.

Israel says it does not consider areas within the Jerusalem municipality to be settlements.

Gilo lies across a narrow valley from the Palestinian village of Beit Jala. It became a target for militants during the second Palestinian uprising against Israeli occupation in 2000.

Photo: Gilo is built on land captured by Israel in 1967