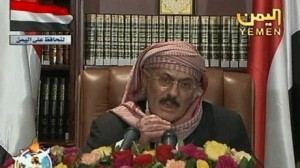 In his first speech since returning to Yemen, President Ali Abdullah Saleh confirmed on Sunday that his deputy remained authorized to sign a transfer-of-power agreement that would lead to early presidential elections, but he did not make any new concessions.

Mr. Saleh surprised critics and supporters alike by returning to Yemen on Friday from Saudi Arabia, where he was recuperating from injuries suffered during a bomb attack on the presidential palace in June. He has withstood months of antigovernment protests, the loss of powerful allies and international support, and even what seemed like an assassination attempt to remain in power.

By returning, Mr. Saleh inserted himself into what has turned into a bloody struggle in the streets of the capital between his family members, who control a portion of the armed forces, and Maj. Gen. Ali Mohsin al-Ahmar, a former ally who severed ties with Mr. Saleh in March. Urban warfare threatens to escalate into a larger civil war in this already beleaguered country that is on the brink of chaos. Over 100 people have died in the fighting.

In a speech that was broadcast Sunday night on state-run Yemen TV, Mr. Saleh said “we are committed” to the Gulf initiative, a plan originally brokered by the Persian Gulf states that make up the Gulf Cooperation Council. The plan would allow for a transfer of presidential power and pave the way for early elections.

Two weeks ago, while he was still in Saudi Arabia, Mr. Saleh gave Vice President Abed Rabbo Mansour al-Hadi the authority to sign the initiative. He did not, however, transfer all presidential authority to Mr. Hadi, who is seen as politically weak.

“That decree is still in effect,” Mr. Saleh said, his voice weak but defiant as usual. He described the plan as a way “to exit this grave impasse.”

Mr. Saleh also mentioned that he would have to leave the country again for medical treatment, though he did not say when he would do so.

The leader of Yemen’s opposition bloc, Yassin Saeed Noman, said the president’s speech contained “nothing new,” though he added that “we are always trying to find something positive” in Mr. Saleh’s declarations. Mr. Noman also said that he would not absolutely reject the options that Mr. Saleh has put on the table.

If they reach an agreement, the governing party and the opposition would decide how to enact the Gulf initiative, including a timetable for elections, the formation of a national unity government and the creation of an independent military council to rule Yemen’s armed forces during the transitional period.

The initiative was initially seen as a crucial step toward breaking the debilitating political stalemate between the governing party and the opposition. But negotiations seemed to be derailed after conflict between the divided armed forces broke out in the capital a week ago following an attack on a protest march by security forces.

By Sunday, the situation in Sana seemed to have reached an eerie calm. Some armed forces had been removed from what had been the front line of battle around a main intersection in central Sana. But many checkpoints, armored personnel carriers and heavily armed soldiers remained deployed.

At a large sit-in against the government in front of the gates of Sana University, protesters largely dismissed Mr. Saleh’s speech, just as they largely dismiss his legitimacy to rule.

“It does not concern us,” said one prominent protester, Adel Shamsan, of the president’s speech. “After he killed all these people, we don’t care.”