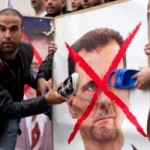 Turkey’s prime minister said Friday that his once-close allies in Syria’s authoritarian regime will fall in a reckoning for the bloody crackdown on their own people, as activists there reported at least 17 more dead in new raids on anti-government protesters. One protest group put the death toll as high as 32.

The prediction from Turkey’s premier, Recep Tayyip Erdogan, significantly deepens Syria’s isolation and is especially potent because it comes from a former ally and a rapidly emerging power in the Middle East. Adding to the gravity of his remarks, he made them in Libya’s capital, where Erdogan celebrated the fall of another strongman, Moammar Gadhafi.

“Those who are attacking their people with tanks and guns will not be able to remain in power,” Erdogan said at a press conference. Syrian President Bashar Assad “will eventually have to pay the price for this,” he said, just like the leaders of Egypt, Tunisia and — most recently — Libya.

Earlier, he told a crowd of thousands of cheering Libyans that leaders cannot prosper through oppression.

“The era of autocracy is ending. Totalitarian regimes are disappearing,” he said. “The people’s rule is coming.”

“The Arab Spring demonstrates that the universal aspiration for open societies, political freedoms and transparent and accountable government cannot be suppressed,” he said. “President Assad and his regime are deluding themselves if they believe they can halt this tide.”

Turkey was once a major ally of Syria, but its leaders have grown increasingly frustrated with Damascus as it defies calls to stop the bloody crackdown on dissent that the U.N. says has killed 2,600 people. Even Syria’s closest ally, Iran, has called on Assad to end the violence in a sign of growing alarm over the 6-month-old uprising.

The activists reported new demonstrations from the capital, Damascus, and its suburbs to the southern province of Daraa, where the protest movement was born in mid-March. Crowds also gathered in the eastern province of Deir el-Zour as well as the province of Latakia on the Mediterranean coast and central regions.

Activists, citing a network of sources on the ground, said the death toll was at least 17. One major activist group, called the Local Coordinating Committees, put the figure at 32.

Heavy restrictions on journalists have made it impossible to independently verify the accounts of either side.

The Friday protests, which have become a weekly ritual after the midday Muslim prayer services, were held under the banner “We will continue until we bring down the regime.”

Syria’s uprising, which is targeting one of the Middle East’s most repressive regimes, began amid the wave of anti-government protests that are transforming the Arab world from North Africa to the Persian Gulf.

The London-based Syrian Observatory for Human Rights said security forces shot dead 17 protesters. The greatest bloodshed was in the northwestern region of Jabal al-Zawiya, where 10 people were killed in raids.

State-run TV said a policeman was killed and four wounded Friday when they came under fire in the village of Busra Hariri in the southern province of Daraa.

Syria has disputed accounts of civilian deaths and says the regime is fighting terrorists and thugs — not true reform seekers. A senior Assad adviser, Buthaina Shaaban, said Monday that the toll since March was really 1,400 — evenly split between security forces and the opposition.

Amateur video of the protests and the crackdown has made its way online, providing activists with one of their few outlets to the world.

New video posted on an opposition page on social media showed dozens of people marching in a street in the Damascus neighborhood of Kfar Sousse while chanting, “The people want the president executed.” They also shouted, “We don’t want Bashar.”

Despite Assad’s crackdown on the extraordinary revolt against his family’s 40-year dynasty, he has acknowledged the need for reform. He has lifted decades-old state of emergency laws and last month endorsed new laws that would allow the formation of political parties alongside his ruling Baath party and enable newly formed political parties to run for parliament and local councils.

The opposition has rejected the measures and is demanding an end to his rule.

In neighboring Lebanon, the Lebanese army said in a statement that Syrian troops briefly crossed the border late Thursday and opened fire at people trying to flee their country. It added that when Lebanese troops reached the northern area, Syrian troops had left but they still opened fire from inside Syria, damaging a Lebanese army vehicle.

More than 5,000 Syrians have fled to Lebanon since the crisis began.