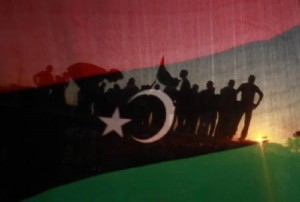 Libyan fighters handed out free petrol to help hundreds of civilians flee a desert town held by Muammar Gaddafi’s forces ahead of an onslaught aimed at capturing one of the ousted ruler’s last bastions.

Complaining of hardship and intimidation, residents of Bani Walid headed to nearby towns or started the 180 km (112-mile) journey north towards Tripoli on Tuesday in cars packed with children and possessions.

Forces of the new ruling National Transitional Council (NTC) that overran Tripoli on Aug. 23 have met unexpectedly stout resistance in five days of fighting for Bani Walid, a sun-baked town set in rocky hills and valleys.

Along with Gaddafi’s hometown Sirte on the Mediterranean coast and Sabha in the southern desert, Bani Walid is one of the last strongholds of old regime fighters.

Their dogged resistance has complicated NTC efforts to normalise life in the oil-rich North African state and the United Nations has voiced fears about the plight of civilians marooned inside besieged pro-Gaddafi towns, particularly Sirte.

Gaddafi’s whereabouts are unknown. NTC officials have said he could be hiding in one of the outposts like Bani Walid, helping to rally a last stand against NATO-backed forces.

Residents escaping Bani Walid on Monday and Tuesday reported days of intense street-to-street fighting. They began to slip out after Gaddafi forces abandoned some checkpoints on the outskirts.

“It’s too dangerous to go outside. Militia men are hiding around the city and (pro-Gaddafi) green flags are everywhere,” 25-year-old resident Abdulbaset Mohamed Mohamed said, driving towards Tripoli.

NTC field commanders said people in Bani Walid had been told via broadcast radio messages they had two days to leave town before it came under full-blown attack.

“I think only 10 percent of the people are Gaddafi supporters. They are fanatics. And the rest are waiting to be liberated. We have given them two more days to leave the city,” NTC fighter Abumuslim Abdu told Reuters.

The country’s new rulers have hesitated to employ heavy-handed tactics to seize Bani Walid, which is home to the Warfalla tribe, Libya’s largest.

Libya’s interim rulers have said that, along with taking control of pro-Gaddafi enclaves, capturing or killing the fugitive leader is a priority and only then could Libya be declared “liberated”.

In the capital, officials trying to restore security said they needed to integrate the fighters who toppled Gaddafi into the police force to ensure the revolution’s legitimacy.

Osama Abu Ras, a member of the Supreme Security Committee for Tripoli, told Reuters that Gaddafi’s forces remained capable of firing missiles and the capital may be a potential target for such attacks.

“We have a very strong (military) front now in our favour but there is a threat of some missiles, including Grad missiles, and rockets. This could be a real threat,” he said.

While Gaddafi and his son Saif al-Islam, wanted by the International Criminal Court (ICC), have remained elusive, three Gaddafi officials were reported to be in NTC custody.

They also said Mohammed Zwei, parliament speaker and former ambassador to Britain had been captured in the past week. Senior military officer Mustapha Kharroubi was also now under the NTC’s watch, witnesses said.

Kharroubi is a veteran Gaddafi official and one of the few remaining officers who participated in Gaddafi’s 1969 coup. It is believed he handed himself over to NTC officials late last month but this could not immediately be confirmed.

Gaddafi’s family entourage in Libya is also dwindling. One of his sons, Saadi, arrived in neighbouring Niger on Sunday after crossing the southern Sahara desert frontier.

Two of Gaddafi’s sons and his only biological daughter have made their to Algeria. One son is reported to have died in the war and three others, including Saif, are still on the run. Reuters