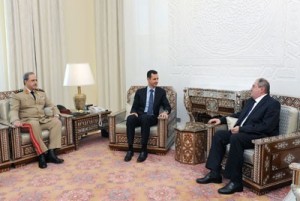 Ghosn said in a statement issued by his office on Monday that “his visit to Syria came to reinforce bilateral ties,” adding that “these ties are stronger and firmer than all the attempts to break them.”

Regarding the crisis in Syria, Ghosn said that “the Syrian people’s will can frustrate all plots and all foreign interventions.”

He also condemned the international sanctions on Syria and said that “that they will not prevent Syria from playing its leading role in the region.”

The new Lebanese government is heavily influenced by Hezbollah, which has been backing the Syrian regime against the pro-democracy uprising by the Syrian people

The United Nations on Monday raised its estimate of the number of protesters killed in the Syrian uprising to 2,600, as it announced the appointment of three investigators to look into human rights abuses in the country, where President Bashar al-Assad has defied international condemnation of the crackdown, even among his dwindling allies.