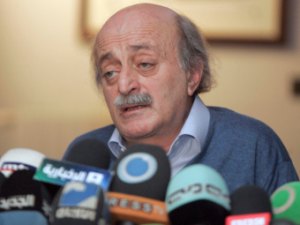 Jumblatt, leader of the Progressive Socialist Party, also disputed Rai’s warning that a regime change in Syria and the possible emergence of the Muslim Brotherhood would pose a threat to the Christians there.

Jumblatt’s comments were the toughest response so far to Rai’s remarks on Syria and Hezbollah’s arms which have evoked a nationwide controversy in Lebanon, drawing harsh criticisms from the opposition March 14 parties, while gaining praise from Hezbollah and its March 8 allies.

Lebanon’s leading March 14 Maronite groups, the Kataeb (Phalange) Party and the Lebanese Forces, have so far refrained from commenting on Rai’s statements, saying they wanted to meet the patriarch to seek clarifications before commenting.

“Linking the fate of Lebanon to the liberation of the Shebaa Farms and linking its future to all the region’s conflicts are rejected,” Jumblatt said in his weekly article to be published by the PSP’s weekly newspaper Al-Anbaa Tuesday.

“Therefore, the [Lebanese-Syrian] borders must be demarcated. This demand had been unanimously approved at the National Dialogue [conference] in 2006,” he said.

Jumblatt recalled the agreement reached by rival leaders from the March 8 and March 14 camps during the 2006 National Dialogue conference on the U.N.-backed Special Tribunal for Lebanon, the defining and demarcation of the Lebanese-Syrian borders, namely in the Shebaa Farms, and the removal of Palestinian arms outside the camps. He said Hezbollah’s arms were the remaining issue to be tackled.

“While affirming the defensive significance represented by the resistance’s arms, it is essential to draw up a defensive plan through which [Hezbollah’s] arms are gradually accommodated in the framework of the Lebanese state as provided for by the [2008] Doha Accord in order to bolster the Lebanese state’s capability to confront any possible Israeli aggression,” Jumblatt said.

Speaking to reporters in Paris and in an interview with the Dubai-based Al-Arabiya satellite channel during his one-week visit to France last week, Rai linked the fate of Hezbollah’s arms to the termination of Israeli occupation of Lebanese territory and the return of an estimated 350,000 Palestinian refugees to their homes in Palestine. He urged the international community to exert pressure on Israel to withdraw from Lebanese territory.

Rai also said that Syrian President Bashar Assad should be given a chance to carry out political reforms in the face of protesters demanding his ouster. He also warned that the rise of the Muslim Brotherhood in Syria posed a threat to the Christians there.

Rai’s remarks drew harsh criticisms from some March 14 politicians who said that the patriarch’s comments on the divisive issue of Hezbollah ran contrary to the concept of state building and contradicted with the Maronite Church’s long-standing position in support of state authority.

Responding to Rai’s statements, Jumblatt said: “Linking [Hezbollah’s] arms to the issue of resettlement [of Palestinians] will keep Lebanon held up indefinitely in the framework of regional conflicts. All Arab and regional parties have recognized the Palestinian state. The Palestinians alone are capable of achieving this goal without any tutelage from anyone.”

The PSP leader indirectly scoffed at Rai’s fears that the rise of fundamentalist Muslim groups in Syria would threaten the presence of Christians there. “The scarring remarks said about the rise of Salafist or fundamentalist movements are inaccurate and are used as scarecrows because the popular demands are indivisible. They are axiomatic and basic rights for all the peoples on earth without discrimination,” Jumblatt said.

Addressing his words to Rai, Jumblatt said: “If some circles are concerned about the Christian presence in Lebanon, the best way that enables Patriarch Rai, who is entrusted with this presence in Lebanon and in the Levant and has a wide experience in the Church’s work, to follow in this respect is to form a committee of Christian financiers to prevent the sale of [Christian] lands, and probably exploit the Church’s properties to help poor Christians who emigrate to earn their living.”

On his return to Beirut Sunday, Rai hit back at his critics and defended his remarks on Syria and Hezbollah’s arms which sparked a political storm in the Christian heartland. He said his statements were misinterpreted by some March 14 Maronite politicians.

The opposition March 14 parties, including former Prime Minister Saad Hariri’s Future Movement, have launched blistering campaigns against Hezbollah, calling on the party to surrender its arms to Lebanese authorities. They have also accused Hezbollah of running its own mini-state at the expense of state authority.

Following the meeting at the patriarch’s seat in Bkirki, north of Beirut, Aoun told reporters: “It is normal to visit his Beatitude to congratulate him on his safe return. Of course, it is not new for us to support his attitudes because he is entrusted with the Synod for Lebanon and the Synod for the Levant.”

Meanwhile, French Ambassador to Lebanon Dennis Pietton described Rai’s visit to France as “successful,” but expressed regret that the patriarch’s statements on Syria and Hezbollah’s arms had caused divisions among the Lebanese.

Speaking to reporters after meeting Prime Minister Najib Mikati at the Grand Serail, Pietton said Rai’s visit to France was “important” during which the patriarch met a number of French officials, including President Nicholas Sarkozy, to discuss Lebanese-French ties, the popular uprisings in the Arab world, including the situation Syria, the STL and the work of the United Nations Interim Force in Lebanon.