Sarkozy tells Rai: The regime in Syria is over 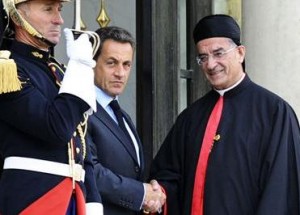 French President Nicolas Sarkozy reportedly told the visiting Maronite Patriarch Beshara Rai, who fears for the future of minorities in Syria, that “the regime in Syria is over,” adding, “this is a certainty, and not an expectation.

He also reportedly told Rai that the Christians had to prepare for such an outcome and work toward the establishment of a civil state.

Sarkozy’s statements come after Rai said that “any further escalation of the crisis in Syria will lead to a stricter regime than the current one, such as the rule of the Muslim Brotherhood, and the Christians will pay the price.”

Rai also said that “the regime change in Syria and the emergence of a Sunni regime will lead to an alliance between them and their Sunni brothers in Lebanon, thus further worsening the crisis between the Shiites and the Sunnis.”

Rai’s new stance reminded the Lebanese of MP Walid Jumblatt’s U-turn in 2009. Both Rai and Jumblatt appear to have made the switch in their stances out of fear .

Jumblatt who was elected by March 14 voters during the 2009 elections defected officially from the March 14 (three months after the Der Spiegel report of May 2009 revealed that Hezbollah was behind Hariri’s murder) for fear over a Shiite -Sunni strife if Hezbollah members were indicted by the STL. But the Sunnis of Lebanon have proved him wrong so far . Not one shot was heard , not one tire was burnt and not one road was blocked in the mainly Sunni areas of Beirut, Tripoli or Sidon and Lebanon maintained its calm since the indictment was announced .

In an almost direct response to Patriarch Rai, LF leader Samir Geagea said that “linking the fate of Eastern Christians to that of totalitarian regimes is a falsification of history and of our identity.”

General Michel Aoun also staunchly defended Patriarch Rai’s stance, which he applauded, saying: “The alternative to the current regime in Syria will be the Muslim Brotherhood who believe that democracy contravenes the Sharia.”

Aoun also said that “if the Syrian regime falls the Christians will lose the most.”

Al-Jamaa al-Islamiya on Friday issued a statement responding to Patriarch al-Rai and Aoun’s latest comments on recent developments in Syria.

“ A regime change in Syria will not negatively impact relations between the [groups] that form the Lebanese community.”

“Inciting sectarian feelings will not benefit any sect in the region… and it will open new debates that will harm all groups ,” the statement added.

The Sunni party also called for renewing the Christian-Muslim dialogue.

In an editorial published in Lebanon Now website Michael Young who is an opinion editor of the Daily Star newspaper told Rai :”You are wrong”

This week Rai blundered again, with perfectly reckless comments on the uprising in Syria, offered up in separate contexts. The cycle started when the patriarch, deploying high ecclesiastical ambiguity while on a visit to Paris, wondered in a France 24 interview, “Are we heading in Syria toward a Sunni-Alawite civil war? This, then, is a genocide and not democracy and reform. Are we heading toward a division of Syria into sectarian mini-states?” Rai then warned the French, “What we are asking of the international community and France is not to rush into resolutions that strive to change regimes.”

“For the Christians to survive in the Middle East, they must be on the side of democracy, human rights and the rule of law. Only democracy and genuinely civil orders, to borrow from Sarkozy, can truly protect them—not a sordid game of alliances with other minorities, particularly repressive minorities. Bolstering butchers will spell the end for the Christians, and Bechara Rai should know that by now.”