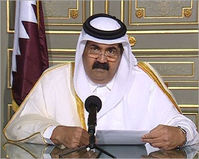 Emir of Qatar Hamad bin Khalifa al-Thani was attacked on his way to his Palace, Al Fajr newspaper reported on Monday .

The gunmen fired at Qatari Emir’s motorcade, which crashed on the way to the Palace where the meeting between Qatari Emir and Russian envoy was to take place.

The incident left Qatari Emir injured. He was taken to the hospital with eight others who were wounded