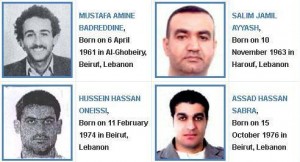 The March 14 General Secretariat issued a statement on Wednesday calling on the cabinet to either find the men indicted in the assassination of Lebanon’s former PM Rafik Hariri or “quit.”

“The cabinet is held complete responsibility, and it should either find the suspects or leave,” March 14 statement said.

The statement added that the TIME magazine interview published last Friday with one of the suspects indicted by the UN-backed Special Tribunal for Lebanon (STL) is a “scandal for the government that declared its inability to locate the accused.”

“The accused man’s statements to the magazine is a ‘provocative challenge’ by Hezbollah.”

“Dragging Lebanon’s Shiites into the adventures of some parties that claim to represent them is something we reject.”

Four Hezbollah members have been indicted by STL in Hariri’s 2005 assassination. However, the Shiite group strongly denied the charges and refuses to cooperate with the court.

In the interview the Hezbollah member indicted in the murder of Hariri boasted : “The Lebanese authorities know where I live, and if they wanted to arrest me they would have done it a long time ago. Simply, they cannot.”

According to Time magazine , the accused man arrived alone aboard a scooter at the home of his Hezbollah comrade. While discussing the indictments, he revealed his true identity and confirmed it by showing an old ID card, but agreed to be interviewed only on condition that neither his name nor the location be revealed.