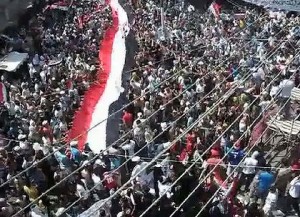 Beirut, Lebanon- Syrian security forces, cracking down on opposition strongholds in the city of Latakia, herded thousands of people into a stadium after taking away their identification cards and mobile phones, activists said.

Iranian snipers have also been deployed, a former member of the secret police said.

The officer, speaking on condition of anonymity, said he had beaten prisoners and fired on protesters in Damascus.

At times during the past two months he was aware of Iranian troops – a fact confirmed by senior officers – alongside his team in the Syrian capital.

”We knew they were from Iran because we were not allowed to speak to them and they were kept well away from us,” he told London’s Telegraph newspaper.

His account confirmed other reports that Syria has turned to its closest ally for help in putting down the protests directed at the Assad family’s 41 years in power.

Forces loyal to the regime of the President, Bashar al-Assad, continued hammering opposition strongholds in Latakia, the country’s main port city, especially in the district of Ramleh, which has been pummelled with tank, gunboat and automatic weapons fire following the large anti-government demonstrations that broke out on Friday.

Security forces began ordering residents of the area, which includes a refugee camp housing more than 10,000 Palestinians, to go to a soccer stadium before the start of a huge military operation, activists said. At least five people were confirmed dead.

”They were told they should leave their homes and go to stadiums because the armed forces were going to flatten the area,” an activist said. ”Cellphone networks were cut as thousands of people left their houses and flocked towards the stadium. As they were gathered and directed to the stadium, their IDs were confiscated.”

The latest developments are sure to inflame mounting international concern over Syria. The United Nations agency responsible for overseeing Palestinian refugee camps in the Middle East said on Monday it was ”gravely concerned” about the situation in Latakia, and demanded access to the facility.

Meanwhile, the Turkish Foreign Minister, Ahmet Davutoglu, sharpened his rhetoric against Syria after visiting Damascus on Tuesday last week and extracting a promise to ease military operations and enact reforms.

”This is our final word to the Syrian authorities, our first expectation is that these operations stop immediately and unconditionally,” Mr Davutoglu was reported as saying. ”If these operations do not stop there will be nothing left to say about the steps that would be taken,” he said, without specifying what actions Turkey would take.