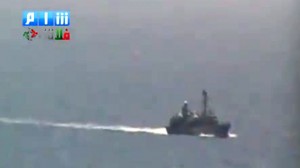 As the gunships blasted waterfront districts, ground troops backed by tanks and security agents stormed several neighborhoods. The sharp crackle of machine-gun fire and loud explosions could be heard across the city.

“We are being targeted from the ground and the sea,” said a resident of the al-Ramel district, which is also home to a Palestinian refugee camp. “The shooting is intense. Many homes have been destroyed, and the ‘shabiha’ (thugs) have broken into shops and businesses.”

He said that at least three gunboats were taking part in the offensive and that many people have been killed and wounded. He spoke on condition of anonymity for fear of reprisals.

“We cannot go out. They are raiding and breaking into people’s homes,” he said, citing reports that about a hundred people have been arrested.

The intense operation in Latakia, a key port city once known as a summer tourist draw, is part of a brutal government crackdown on several Syrian cities meant to root out protesters demanding the ouster of President Bashar Assad.

The city has a potentially explosive sectarian mix. Sunnis, which are a majority in Syria, live in Latakia’s urban core, while Mr. Assad’s minority Alawite sect, an offshoot of Shiite Islam, populates villages on the city’s outskirts, along with small minorities of Christians, ethnic Turks and other groups.

The crackdown, which has targeted predominantly Sunni areas of the city of more than 600,000, raised concerns of sectarian bloodshed in a country that already has seen an alarming rise in sectarian tensions since the start of the uprising.

On Saturday, at least 20 tanks and armored personnel carriers rolled into the city’s al-Ramel district amid intense gunfire that sent many residents fleeing the area. Activists said at least two people were killed.

The security forces appear to be intent on crushing dissent in the al-Ramel neighborhood, which has seen large anti-Assad protests since the Syrian uprising in mid-March. On Friday, as many as 10,000 people took to the streets there, calling for Mr. Assad’s ouster.

After their initial assault on the city Saturday, Syrian security forces pushed back into Latakia again Sunday.

In al-Ramel alone, at least 21 people have died in the shooting, said Rami Abdul-Rahman, head of the London-based Syrian Observatory for Human Rights. The activist network the Local Coordination Committees put the number at 19.

Both groups said gunboats in the Mediterranean are taking part in the offensive, firing heavy machine guns. A large number of people were wounded as a result of the indiscriminate firing on houses, they said.

“They are trying to take control of the city as they did in other places,” Mr. Abdul-Rahman said.

Amateur videos posted on the Internet by activists showed at least one gunship patrolling the coast opposite al-Ramel and tanks rumbling along the waterfront.