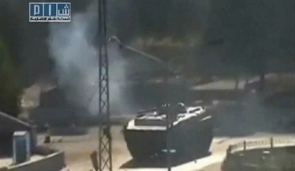 Syrian President Bashar al-Assad pressed on with a tank onslaught against a city Monday, but was plunged deeper into international isolation by Arab neighbours who denounced his violent crackdown and recalled their envoys from Damascus.

Assad’s five-month campaign against street protests has emerged as one of the bloodiest episodes of the wave of democratic revolutions sweeping the Arab world this year. Killings have worsened sharply in the past week after Assad ordered tank assaults on two cities.

Other Arab leaders had been cautious about criticising one of their peers, but Saudi Arabia’s King Abdullah broke the silence with a rare intervention overnight, demanding an end to the bloodshed and recalling the Saudi ambassador from Damascus.

Hours later Kuwait and Bahrain recalled their envoys too.

Syrian tanks and troops poured into the eastern Sunni city of Deir al-Zor in the latest stage of a campaign to crush centres of protest against 41 years of Assad family rule.

“Armoured vehicles are shelling the al-Hawiqa district heavily with their guns. Private hospitals are closed and people are afraid to send the wounded to state facilities because they are infested with secret police,” Mohammad, a Deir al-Zor resident who did not want to give his full name.

He said at least 65 people had been killed since tanks and armoured vehicles barrelled into the provincial capital, 400 km (250 miles) northeast of Damascus, Sunday, crumpling makeshift barricades and opening fire.

Later Monday Assad fired defence minister Ali Habib and replaced him with chief of staff General Daoud Rajha. The state news agency said Habib was ill. Habib had been added to an EU sanctions list last week for his role in crushing protests.

Syria’s military is effectively under the command of Assad’s brother Maher. Many officers are from the Assad family’s minority Alawite sect.

The Syrian Observatory of Human Rights said among those killed were a mother and her two children, an elderly woman and a young girl. Syria has expelled most independent media since the uprising began, making it hard to confirm accounts.

The sudden withdrawal of ambassadors of Gulf Arab states leaves Assad with few diplomatic friends. Western states have imposed sanctions on top Syrian officials and countries with close ties to Damascus such as Russia and Turkey have warned Assad he is running out of time.

Nevertheless, countries have not proposed military action like that ranged against Libya’s leader Muammar Gaddafi.

Assad’s forces shot dead at least three mourners Monday when they opened fire at a funeral for a pro-democracy protester in the southern border city of Deraa, cradle of the five month uprising, witnesses and activists said.

Rami Abdulrahman of the Syrian Observatory said one of the dead was Maen Yousef Awadat, a leading political campaigner, who had recently been released from prison.

The funeral was for a youth arrested earlier this week when he took part street protests after nightly Ramadan prayers. His body was handed to relatives earlier Monday with signs of torture, according to relatives contacted in Deraa.

The Saudi criticism was the sharpest the oil giant has directed against any fellow Arab state since uprisings began to sweep the region, toppling autocrats in Tunisia and Egypt, kindling civil war in Libya and rattling elites.

“What is happening in Syria is not acceptable for Saudi Arabia,” the Saudi king said in a written statement read out on Al Arabiya satellite television. “Syria should think wisely before it’s too late and issue and enact reforms that are not merely promises but actual reforms.”

“Either it chooses wisdom on its own or it will be pulled down into the depths of turmoil and loss.”

The assault on Deir al-Zor, in an oil-producing province bordering Iraq, took place a week after tanks stormed the city of Hama, where residents say scores have been killed.

The official SANA news agency said Monday the military was winding down in Hama. Residents said there were still tanks in parts of the city and security forces were making arrests. The Observatory said 1,500 people had been arrested in Hama’s Jarajima neighbourhood and troops killed three civilians.

Like most of Syria, Hama and Deir al-Zor are mainly-Sunni cities, and the crackdowns there resonate with Sunnis, who form the majority in the region and rule most Arab countries.

The Arab League called for an end to the bloodshed. France and Germany repeated calls for Assad to scrap the military campaign which rights groups say has killed at least 1,600 civilians.

Relations between Sunni Saudi Arabia and a Syrian ruling elite from Assad’s minority Alawite sect have been tense since the assassination in 2005 of Rafik al-Hariri, a Western-backed Lebanese Sunni statesman who also had Saudi nationality.

In Cairo, the head of the most influential school of Sunni Islam, al-Azhar, described the violence as a human tragedy that had to stop. “Blood only fuels the fires of revolutions,” said Grand Imam Ahmed el-Tayeb.

Hama is known throughout the region as the site of a crackdown by Assad’s father nearly 30 years ago against Sunni Islamists in which many thousands died.

Syrian authorities denied that any Deir al-Zor assault had taken place. The official state news agency said “not a single tank has entered Deir al-Zor” and reports of tanks in the city were “the work of provocateur satellite channels.”

Syrian authorities say they have faced attacks since the protests erupted in March, blaming armed saboteurs for civilian deaths and accusing them of killing 500 security personnel.

State television broadcast footage Sunday of mutilated bodies floating in the Orontes river in Hama, saying 17 police had been ambushed and killed in the central Syrian city.

“Our message will be decisively delivered,” he said, drawing a rebuke from an Assad adviser, who described the Turkish statement as unbalanced.

U.S. Secretary of State Hillary Clinton spoke to Davutoglu Sunday, the State Department said, asking him to “reinforce” Washington’s position that Syria must immediately return its military to barracks and release prisoners.