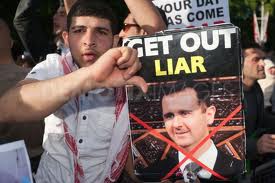 The Syrian military tightened its suffocating siege on the city of Hama on Saturday in its drive to crush the main center of the anti-regime uprising in the country, even as the foreign minister promised that free parliamentary elections would be held by the end of the year in a gesture of reform.

Like previous reform promises, the new announcement is unlikely to have much resonance with Syria’s opposition, which says it has lost all confidence in President Bashar Assad’s overtures.

The four-year term of the current parliament expired earlier this year and Assad is expected to set a date for new legislative elections before the end of 2011.

Foreign Minister Walid al-Moallem pledged to press ahead with reforms and said the new parliament “will represent the aspirations of the Syrian people.”

“The ballot box will be the determining factor and it will be up to the elected parliament to review adopted draft bills to decide on them,” he said during a meeting he held with Arab and foreign ambassadors in Damascus.

But Syria was coming under increasing international criticism over the bloody siege of Hama, launched on Sunday after residents calling for Assad’s ouster took over the city of 800,000 and barricaded it against regime forces. Tens of thousands of protesters marched in cities around the country on Friday, met by gunfire from Syrian troops. Activists said Saturday that 24 people were killed.

Friday night, tanks shelled Hama, causing several casualties, one resident said. He said there were reports that a hospital was hit in the bombardment.

The resident sneaked out of Hama on Friday to try and get supplies and spoke to The Associated Press by phone Saturday from the city’s outskirts.

“I am trying to get back but it’s impossible, they’ve tightened the siege even more, not even an ant can go in or out today,” he said, speaking on condition of anonymity for fear of reprisals.

Authorities have imposed a media blackout on Hama and the reports could not be immediately confirmed. Electricity, internet and phone lines in the city have been cut for seven days, and residents have reported food and medical supplies dwindling, amid frequent shelling and raids. Rights group say at least 100 people have been killed, while some estimates put the number as high as 250.

Syria’s government broadcast images of buildings and empty rubble-strewn streets in Hama, claiming the military was putting an end to an armed rebellion launched by “terrorists.”

On Saturday, Gulf Arab countries broke their silence on the bloodshed, calling for an immediate end to the violence and for implementation of “serious” reforms in Syria.

In a statement posted on its website, the six-nation Gulf Cooperation Council expressed deep concern and regret for “the escalating violence in Syria and use of excess force.”

“I don’t think that there can still be a political future for Assad that is supported by the Syrian people,” Guido Westerwelle told the Frankfurter Allgemeine Sonntagszeitung, the newspaper reported Saturday in a preview of an article for Sunday’s edition.

“The massive use of force shows that the regime shies away from nothing to keep power,” he said.

In a sign that at least the U.S. was expecting things to get worse, the U.S. State Department on Friday urged Americans to leave the country immediately. The warning came as congressional calls grew for the Obama administration to impose severe new sanctions on Assad’s regime.

In a new travel warning, the State Department said Americans should depart Syria while commercial flights and other transportation are still available “given the ongoing uncertainty and volatility of the situation.” It noted that Syrian authorities have imposed tight restrictions on the ability of U.S. and other diplomats to move around the country.

Across the country, tens of thousands of protesters marched on Friday, chanting their solidarity with Hama and demanding the ouster of President Bashar Assad.

Located 130 miles (210 kilometers) north of the capital Damascus, Hama holds special significance for Syrians because of a 1982 massacre that sticks in the collective memory. In 1982, Assad’s father, Hafez Assad, ordered the military to quell a rebellion by Syrian members of the conservative Muslim Brotherhood movement there, sealing off the city in an assault that killed between 10,000 and 25,000 people.

The toll was confirmed Saturday by the Local Coordination Committees, a key activist groups tracking the Syrian uprising. AP