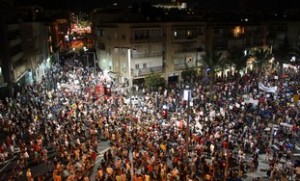 Israeli Jerusalem Post quoted Channel 2 News as saying that over 280,000 people turned out for the demonstration in Tel Aviv, and over 300,000 people were believed to be protesting throughout Israel chanting “The nation demands social justice!”

This is the third consecutive Saturday as part of massive demonstrations over the high cost of living in Israel .

The Israeli Student Union announced that more than 50 buses have transported students from academic institutions across the country to Tel Aviv so they could attend the massive march and rally.

Head of the Student Union Itsik Shmueli, speaking at the Tel Aviv rally, said “Israeli students have been trying to bring about change for over three weeks now. Hundreds of thousands of Israelis have been in the streets with us, telling one another that we love the state with all our hearts. Maybe the state is ready to give up on us, but we are not ready to give up on it, on the dream to have homes, to raise children in them.

“We, the students, the youth, are here today to proclaim: We have the power to change,” Shmueli said.

He added, “We are not talking about a change in leadership. We don’t need to change the nationally elected parliamentary coalition. We, the youth, are demanding a change in the cruel economic system. We demand a humane economy rather than a predatory one. We require an economy that recognizes distinct economic hardships and is not only interested in numbers.

“We need more of a balance between a free economy and a personalized one,” Shmueli told crowds in front of Tel Aviv’s government complex. “We need to make a concerted effort to reduce socioeconomic gaps, and to do a better job addressing the basic needs of citizens.”

Social justice rallies were held across northern Israel on Saturday night as well.