Shawkat ordered by Assad to crush the Hama revolt 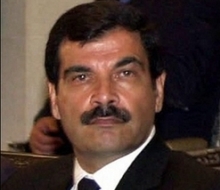 Assef Shawkat a Syrian general, and deputy-chief of staff of the Syrian army since July 2009 was ordered by Syrian president Bashar al Assad to crush the revolt in Hama, al Jumhouriyeh newspaper reported on Friday .

Shawkat is Assad’s brother-in-law . He is married to Bushra al-Assad , the president’s sister .

According to activists hundreds have been killed in Hama by the Syrian security forces during the past five days. Many described the killings in Hama as a massacre . there are concerns that the new development will lead to another major massacre

The city of Hama is known as the site of a brutal crackdown in 1982, when the Syrian army, under the orders of the president of Syria Hafez al-Assad ( father of current president Bashar al-Assad ), conducted a scorched earth policy against the town of Hama in order to quell a revolt by the Sunni Muslim community against the regime of al-Assad. The Hama massacre, personally conducted by president Assad’s younger brother, Rifaat al-Assad, effectively ended the campaign begun in 1976 by Sunni Islamic groups, including the Muslim Brotherhood, against Assad’s regime, whose leaders were disproportionately from president Assad’s own Alawite sect.