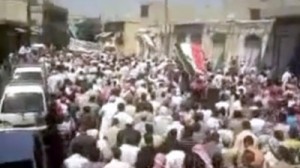 At least 11 people are reported to have been killed by security forces in Syria as tens of thousands of protesters across the country demand the downfall of the regime.

Violence flared during the mass demonstrations after the first Friday prayers of Ramadan, with police using live bullets as well as tear gas to try to disperse the crowds.

In a suburb of the capital Damascus, protesters hid behind walls as the shooting continued, occasionally emerging to throw rocks towards the police.

Videos posted online also show marches taking place in towns and cities across the country on what has been dubbed “God Is With Us Friday”.

In Hama, residents awoke to the sounds of a battle as government tanks continued their offensive in the city, but thousands still dared to venture out to call for President Bashar al Assad to go.

Human rights organisations say as many as 200 people have been killed in Hama since Sunday, when the latest regime offensive began.

“People are being slaughtered like sheep while walking in the street,” one resident said.

“I saw with my own eyes one young boy on a motorcycle carrying vegetables run over by a tank,” he said.

Food supplies to the city, along with water and electricity, have been cut off and the hospitals are reported to be running out of supplies.

Syrian state television showed pictures in the city of damaged buildings and wreckage in the streets.

Other videos posted online showed dozens of tanks on low-loader trucks being moved into Hama.

The fresh attacks come as the US government imposed further sanctions on the country in a bid to stop Mr Assad’s brutal crackdown on opposition protesters.

Hama has been under military siege as the president tries to crush a growing five-month uprising.

The violent offensive has sparked growing international condemnation with world leaders calling on Mr Assad to step down.

The US government reacted by imposing sanctions against the president’s confidante Muhammad Hamsho and his firm, Hamsho International Group, freezing all assets in US jurisdictions and barring Americans from doing business with them.

The measure follows the White House introducing similar sanctions on Mr Assad and several senior Syrian officials in May.

It also comes days after the European Union expanded asset freezes and travel bans to take in five more military and government officials from Syria, bringing the number of people targeted by the EU to 35, including Mr Assad.

US Secretary of State Hillary Clinton said the death toll in the “incredible tragedy” unfolding on Syrian streets is “numbing”.

She accused the Syrian government of killing more than 2,000 of its own citizens.

“The shooting death of a one-year-old recently by the Syrian regime’s tanks and troops is a very stark example of what is going on,” she said.

Russian president Dmitri Medvedev said the number of deaths “causes us grave concern” and he warned Mr Assad that he would face a “sad fate” if he fails to introduce reforms.