Editorial: Who Will Help the Syrians? 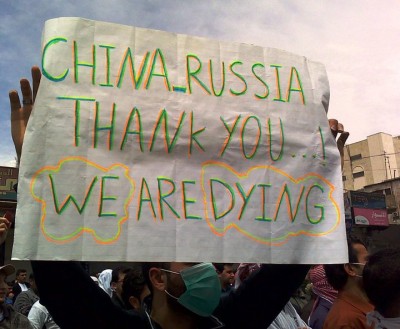 As many as 1,600 courageous Syrians have been slaughtered since pro-democracy demonstrations began in March. On Wednesday, after three days of shelling, President Bashar al-Assad ordered his military to storm Hama, the city where his father killed up to 20,000 people three decades ago.

Where has the international community been? Shamefully paralyzed.

On Wednesday, the United Nations Security Council finally issued a statement condemning “widespread violations of human rights and the use of force against civilians by the Syrian authorities” — but with no threat of sanctions. For two months, Russia, China, India, Brazil and South Africa had blocked any action at all. They have allowed Mr. Assad to believe that he can keep killing and pay no price.

The statement, of course, is better than silence. We would like to believe that even this faint change of heart by Moscow — a longtime military supplier and patron — will grab Mr. Assad’s attention. But we suspect that he will instead focus on how Russia managed to water down the language in a ridiculous bid for evenhandedness.

The Security Council’s statement unfairly blames the protesters when it urges “all sides to act with utmost restraint, and to refrain from reprisals, including attacks against state institutions.” And it gives Mr. Assad — who needs to be gone — a lifeline by urging his government to implement its now thoroughly discredited “commitments” to reform.

It is going to take a lot more pressure to persuade Mr. Assad that his time is up — or to persuade those enabling him to switch sides. The Council needs to impose tough sanctions, including travel bans and asset freezes on Mr. Assad and all of his top aides. It should refer the Syrian leader and his thugs to the International Criminal Court for a war crimes investigation and direct states to halt investment in Syria’s government-run energy sector. More dithering will only mean more killings.

The United States and the European Union have done a much better job, although not as clearly and swiftly as needed. They have imposed several rounds of travel bans and asset freezes on Mr. Assad and his henchmen — Europe added more names to its list on Monday. They need to ratchet up the pressure.

One idea is for the top consumers of Syrian oil — Germany, Italy, France and the Netherlands — to stop buying it. The exports are small enough that a suspension would have little effect on world prices but would still have a big impact on Damascus. There should be no new investments in Syria’s energy sector.

Turkey, once one of Syria’s closest allies and now a critic, needs to use all of its leverage. Washington, the European Union and Turkey should also be pressing the cowardly Arab League to stand with the Syrian people.

On Tuesday, Secretary of State Hillary Rodham Clinton met Syrian opposition members. Washington and its allies should do all they can to help lay the groundwork for a democratic, post-Assad Syria. Right now, they need to marshal every possible diplomatic and economic pressure to help the Syrian people topple this brutal regime