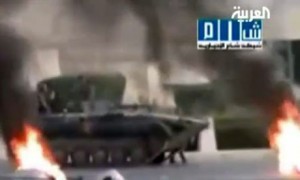 Activists say Syrian troops are shelling the flashpoint city of Hama for a second day in a fierce assault aimed at crushing dissent as Muslims begin their month of fasting.

Rami Abdul-Rahman, the head of the London-based Syrian Observatory for Human Rights, said there was also intense shooting in the eastern city of Deir el-Zour overnight.

More than 1,600 civilians have been killed in the crackdown since an uprising began against the government in mid-March.