Syrian tanks stormed the Syrian city of Hama early on Sunday, residents said, after besieging it for nearly a month in response to some of the biggest demonstrations against President Bashar al-Assad’s rule. 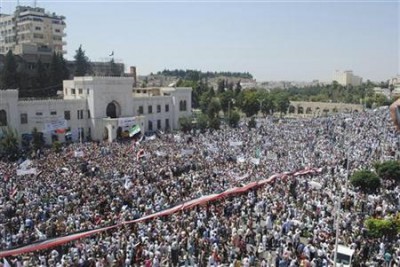 One of the residents, a doctor who did not want to be further identified for fear of arrest, told Reuters that at least one civilian, a youth called Fares al-Naem, was killed in shelling by tanks in Bab Sbahi, in the northern quarter of the city.

“Tanks are attacking from four directions. They are firing their heavy machineguns randomly and overrunning makeshift road blocks erected by the inhabitants,” he said by phone, the sound of machinegun fire crackling in the background.

“Lots of casualties have been taken to Badr hospital. There is a shortage of blood,” he added.

Another resident said snipers had climbed onto the roofs of the state-owned electricity company and the main prison, and that electricity had been cut in eastern neighborhoods.

Assad is attempting to crush an uprising against his 11-year rule that broke out in March, inspired by ‘Arab Spring’ revolutions in Tunisia and Egypt, and has spread across the country.

Syrian authorities have expelled most independent journalists, making it difficult to verify reports of fighting.

Hama was the scene of a massacre in 1982 when Assad’s father, the late president Hafez al-Assad, sent his troops to crush an Islamist-led uprising, razing whole neighborhoods and killing up to 30,000 people in the bloodiest episode of Syria’s modern history.

The U.S. ambassador to Syria, Robert Ford, visited the city earlier this month in a gesture of international support for what he described as peaceful pro-democracy demonstrations.

Turkish Prime Minister Tayyip Erdogan, once one of Assad’s main allies, said in May that “we do not want to see another Hama massacre,” and warned the 45-year-old president that it would be hard to contain the consequences if it were repeated.

The Syrian leadership blames “armed terrorist groups” for most killings during the revolt, saying that more than 500 soldiers and security personnel have been killed.

An activist group, Avaaz, said in a report last week that Syrian security forces had killed 1,634 people in the course of their crackdown, while at least 2,918 had disappeared. Another 26,000 had been arrested, many of whom were beaten and tortured, and 12,617 remained in detention, it said.