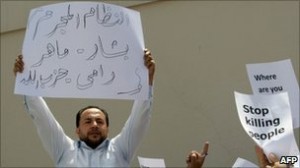 Hezbollah issued a statement on Thursday “strongly denying” reports that it is taking part in the crackdown against the pro-democracy protesters in Syria.

“Such allegations are completely baseless,” the party, which is allied with the ruling Syrian  regime, said.

It added that “such reports attempt to incite a political strife in order to serve…imperialist policies,” a reference to the West.

Several activists claimed that the Iranian backed Hezbollah is assisting the Syrian regime in its brutal crackdown against the protesters. ( See photo)

Activists say the Syrian government’s crackdown on pro-democracy and anti-regime protests has left more than 1,500 civilians dead. About three thousand Syrian have been listed as disappeared

Photo: A Syrian protester with a poster that reads: “The criminal regime of Bashar, Maher, Rami and Hezbollah.” In reference to Syrian president Bashar al Assad, his brother Maher, his cousin Rami Makhlouf and the Iranian and Syrian backed Lebanese Hezbollah militants