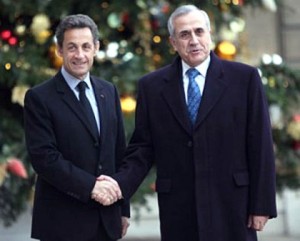 Suleiman called on the relevant authorities to increase their efforts to reveal who the perpetrators are and punish them, adding that such attacks do not serve Lebanon or its image. “Tampering with security is forbidden.”

“This is a terrorist attack that aims to harm Lebanon’s stability and security and use the country to send [certain] messages.”

Siniora voiced the importance of increasing efforts to reveal who the perpetrators behind the attack are and punish them.

The state must “restore” its authority on all Lebanese territories through its legitimate security institutions, he added.

Lebanese Forces leader Samir Geagea said on Wednesday that “the intention behind the attack against the French UNIFIL battalion is to say that the army and the state do not have anything to do with anything, and are just figureheads,” according to a statement issued by his office.

Geagea voiced surprise that “the attack that came following [Lebanese] army chief Jean Kahwaji’s visit to France, [during which he said] that the Lebanese army is the guarantor… for the security of UNIFIL forces in South Lebanon.”

He expressed his regret for the harm suffered by UNIFIL soldiers “who left their homelands to keep the security and peace in our country,” wished them a speedy recovery, and thanked the French government for “all it is doing in favor of Lebanon.”