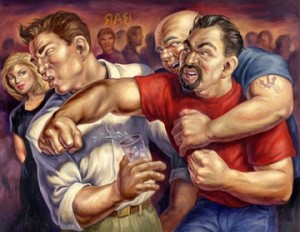 A fistfight erupted in the southern town of Houla in Marjeyoun when members of a party ordered the owner of a liquor store to close the shop, reported the Central News Agency. Two people were hurt in the quarrel and the store incurred some material damage.

The owner was saved when members of another party intervened to end the dispute.

Tensions between the two March 8 camp parties pervaded the town soon after the dispute, prompting the Lebanese army and Internal Security Forces to intervene, ease the tensions, and launch an investigation in the affair.

Meanwhile, a source from Houla told the news agency that the town is known for the diversity of its residents, rejecting the violation of this freedom by any side and attempts to transform it into a closed security zone.