by yalibnan
2394
As the Obama administration steps up its support for regime change in Syria, the Arab Spring is moving into what could be its hottest phase. The puzzle is how to help
Share: 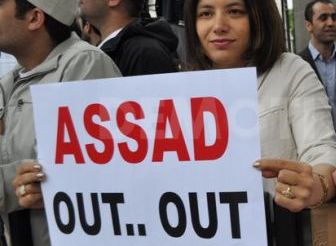 As the Obama administration steps up its support for regime change in Syria, the Arab Spring is moving into what could be its hottest phase. The puzzle is how to help the Syrian opposition gain power without foreign military intervention — and without triggering sectarian massacres inside the country.

For months, as protests mounted in Syria, President Obama waited to see if President Bashar al-Assad could deliver on his talk of reform. Last week, the administration all but gave up on him and switched gears — and began working actively for a transition to a democratic regime.

The new policy was signaled by Secretary of State Hillary Clinton’s blunt statement on July 11 that Assad had “lost legitimacy” and that “our goal is . . . a democratic transformation.”

Clinton has left the door open slightly for reformers within the Assad regime. Last Saturday in Istanbul, she urged “an opposition that can provide a pathway, hopefully in peaceful cooperation with the government, to a better future.” The administration is closely monitoring “who in the current power structure might be amenable to a transition,” says a senior White House official.

A second White House official summarizes the new approach this way: “The Assad ship is sinking. The most important thing is to get people to realize this, so that, hopefully, they will jump off the ship and get on the lifeboat.” For the United States, this means working with Syrian dissidents, and also with Turkey and other regional powers that can help broker change.

The administration wants to encourage the Syrian opposition inside the country to unite, develop a clear agenda and build an inclusive leadership. Leading that effort is Robert Ford, the U.S. ambassador in Damascus; an administration official describes him as a “vehicle for transition.” In meetings with dissidents, Ford is said to have stressed that the opposition must reach out to minorities, such as Christians, Druze and Alawites, who fear that a post-Assad regime will be dominated by the Muslim Brotherhood.

With U.S. encouragement, the opposition hopes to hold a meeting inside Syria over the next several weeks to frame a unified agenda. It tried to hold such an internal gathering last week, in coordination with an exile meeting in Istanbul of the so-called National Salvation Council, but Syrian authorities blocked it.

A road map for the opposition was sketched in an interview by Radwan Ziadeh, a visiting scholar at George Washington University who closely follows the dissident groups. He said he has contacted people who might attend the planned meeting inside Syria, including prominent human-rights activists Riad al-Seif and Walid al-Bunni, as well as Druze, Christian and Alawite figures he named. The aim, said Ziadeh, is “solid leadership that can emerge inside the country” and draft a new “Damascus Declaration” as a platform for transition.

Assad still talks of his desire for new reform laws. But U.S. officials say he has supported (or acceded to) hard-liners led by his brother Maher, who is commander of the Republican Guard, and Hafez Makhlouf, a cousin who heads other security forces.

The Syrian equation is shaped by two “X-factors.” The first is whether the army will split, with influential officers moving away from the regime. A harbinger came last weekend when defecting soldiers gathered in the town of Abu Kamal in eastern Syria. Government tanks surrounded the protesters, and a bloody shootout appeared imminent, but local tribal leaders worked out a truce. U.S. intelligence analysts expect there will be more military defections as the pressure on Assad increases.

The second wild card is sectarian violence between dissident Sunnis and the ruling Alawite minority. The latest grim warning came on Sunday and Monday, when the United States estimates that 15 to 30 Syrians were killed in ethnic fighting in Homs. A White House official called those reports “really worrisome.”

The strategic stakes are high in Syria partly because Assad is allying himself ever more closely with the stridently anti-Western regime in Iran. White House officials last week were circulating a news report that Iran had pledged $5.8 billion in emergency aid to Assad’s regime. Tehran and Damascus may once have pretended that they supported the Arab Spring, but no longer. If Assad falls to citizen protests, the Iranians know they will be the next target.

Obama’s judgment is that “Assad is a guy who has taken all the wrong steps in response to protest,” says a White House official. The thinking in Washington now is about getting to the post-Assad era, quickly and peacefully.