Unclear if Syrian oil pipeline fire was accidental or a sabotage 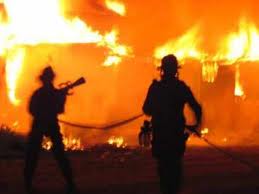 Fire has damaged a pipeline in north-eastern Syria, the oil ministry has said, though it is unclear if the blaze was accidental or caused by sabotage.

State media quoted an official as saying the blaze in Deir al-Zour province was probably the result of dry weather conditions or a pipeline leak.

But witnesses told a UK-based rights group there was an explosion; a local tribal leader said it was a bomb.

The province has been the scene of major anti-government demonstrations.

Eastern Syria accounts for all 380,000 barrels of oil produced per day in the country, but is one of its poorest regions, with little government investment.

The oil ministry source told Sana the pipeline fire erupted on Tuesday, and that flames spread to a wide area before being extinguished.

Officials had begun an investigation into the incident, which “might have resulted from a fire in the surrounding dry grass or from a leak where part of the pipeline is undergoing maintenance work”, the source added.

The flow of oil was not disrupted, as alternative pipelines were used.

Earlier, witnesses told the London-based Syrian Observatory for Human Rights that there had been an explosion.

The pro-government Ikhbariya TV station also reported a blast. It said there were no casualties.

A prominent local tribal leader, meanwhile, said bomb blasts had damaged pipelines in a heavily guarded area in the al-Tayana and Busaira regions, east of the city of Deir al-Zour, near the border with Iraq.

“People are suspecting that the regime is behind the attacks to discredit the democracy cause after months of peaceful demonstrations,” Sheikh Nawaf al-Khatib told the Reuters news agency.

“It is very difficult to hit those pipelines with more troops deploying in Deir al-Zour lately.”

If it was an attack, it would be the first targeting infrastructure since protests against President Bashar al-Assad’s rule erupted in March.

More than 1,400 civilians and 350 security personnel have been killed.