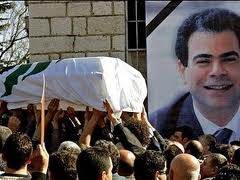 “This story is part of a suspicious campaign aimed at defaming members of the SSNP and tarnishing its image before the public,” SSNP , a staunch ally of Hezbollah and Syria said in a statement adding that the “report is baseless”.

Saudi al-Bilad newspaper quoted on Tuesday an official close to the Special Tribunal for Lebanon as saying that the vehicle used in the killing of Gemayel was found at one of the SSNP’s offices in the area of Koura in northern Lebanon.

The vehicle was allegedly owned by a Lebanese man who works at the U.N. in New York and was stolen shortly before the assassination in the Jdeideh suburb north of Beirut on November 21, 2006.

A lone assailant shot the minister in the head at point-blank range from a silencer-equipped gun after stepping out of the car.

The assassins had made changes to the vehicle to resemble the car of a former Lebanese Forces official who lives in the town of Roumieh not far from the crime scene.

The official also told al-Bilad that the STL will issue new arrest warrants that would end the ambiguity over the killing of Gemayel and the assassination attempt against former LBC anchorwoman May Chidiac on Sept. 25, 2005. 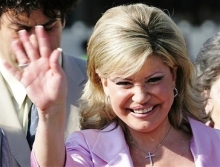 Chidiac was one of the few critics of Syria’s keeping troops stationed in Lebanon after the end of the Lebanese Civil War and charged that the Taif Accords stipulated that Syria withdraw from Lebanon. On the day she was attacked, after the Cedar Revolution and Syria’s troop withdrawal from Lebanon earlier that year, she hosted a talk show in which she criticized Syria’s continuous meddling in Lebanon’s affairs and voiced fears of further violence ahead of the UN report on the death of the former prime minister Hariri

The warrants “accuse the SSNP of involvement in both crimes,” the official said.

The Special Tribunal for Lebanon confirmed on June 30 the indictments in the assassination of Lebanon’s former PM Hariri after an STL delegation met with Lebanon’s state prosecutor Said Mirza and handed him a copy of the Lebanon portion of the indictment and the arrest warrants. Two of the suspects Mustafa Badreddine and Salim Ayyash are reportedly senior members of the Iranian and Syrian-backed Hezbollah while the other two Hassan Aneissy, also known as Hassan Issa, and Assad Sabra played a supporting role in the execution of the assassination