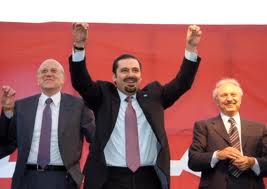 “He did not have to stimulate sectarian feelings against Prime Minister Najib Mikati and me.” Safadi said

“Hariri is distorting the truth in the name of finding the truth,” he added in reference to the former PM’s Tuesday interview

He added that “Tripoli does not belong to anyone or any sect, and the provocative speech that Hariri delivered against Mikati and myself incites people against each other.”

“I wish Hariri had attended the parliamentary sessions on the ministerial statement and discussed it with the government instead of addressing the cabinet from Paris using expressions that do not fit with his position and status,” Safadi also said.

“Hariri did not reveal the plan that the opposition drew to face the government because he intends to topple the cabinet on the streets, and not in the parliament.”

Both Safadi and Mikati were allied with Hariri in the 2009 elections and were elected by march 14 voters. They both defected when Mikati was nominated by the Iranian and Syrian backed Hezbollah to be the PM designate.

– I want to ask Minister of Finance Mohammad Safadi who backed Mikati , what did March 14 do to you?

– Is Mikati’s vow to commit to the STL written down clearly in his government’s Ministerial Statement?

– When I said that on March 13 that I was betrayed, I was honestly referring to Safadi and Mikati and actually Lebanon and the Lebanese people were betrayed.

– The most important thing for me is honesty. I do not have a personal problem with Mikati, but today the current cabinet is that of Hezbollah and carries out the project of the party , and Mikati is the head of the government.

– When we were allied with Mikati in Tripoli [during the 2009 parliamentary elections], did we ally on the basis that we want the truth in Rafik Hariri’s murder ‘in principal’ ? A possible reference to the wording of the ministerial statement about the cabinet’s ‘ in principal’ commitment to STL

– “The decision to bring down Saad Hariri from the premiership was made by two people: Nasrallah and Syrian President Bashar al-Assad. Mikati is only serving as a tool.”