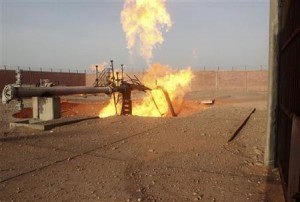 A large explosion has rocked Egypt’s main gas pipeline through the Sinai peninsula, cutting off supplies to neighbouring Israel and Jordan for the fourth time this year.

Masked gunmen entered a pipeline distribution station near the city of al-Arish on Monday night, according to Egypt’s official news agency. The saboteurs reportedly ordered security guards to leave before blowing up the terminal, causing 10-metre-high flames to leap into the air. By Tuesday morning emergency crews had brought the blaze under control.

This latest incident is the fourth such attack on the pipeline since anti-government protests begin in January. Officials had been finalising repairs from a previous pipeline explosion a week ago when the gunmen struck. Earlier assaults in February and April shut down gas exports through the pipeline for several weeks.

The pipeline has long been a source of political controversy in Egypt, particularly since the signing of a 20-year gas export deal with Israel in 2008. The final years of Hosni Mubarak’s rule were marked by widespread opposition to the agreement, both on the streets and in the courts. Campaigners claim that corrupt business dealings enabled Israel to buy gas at below-market prices, and argue that it was wrong to provide energy supplies to the county while it continued its blockade on the Gaza Strip.

Although no group has yet claimed responsibility, Monday’s attack also underscored the ongoing tension between the Cairo-based government and Egypt’s Bedouin communities, who have complained of state-sponsored discrimination against them ever since Egypt reclaimed the Sinai peninsula from Israel in 1982. Activists claim that an official effort to “Egyptianise” northern Sinai through the resettlement of Nile valley dwellers on the peninsula has locked Bedouins out of jobs and housing opportunities and destroyed traditional ways of life.

“There’s been a long-standing conflict simmering between Bedouin communities and the Egyptian state,” said Elijah Zarwan, senior north Africa analyst for the conflict resolution NGO International Crisis Group. “The Bedouin now are looking to make sure that they aren’t left out of the kind of sweeping changes that many Egyptians across the country are hoping to see in the aftermath of Mubarak’s fall. They don’t want to be left behind.”

Shares in Ampal-American Israel Corp, which holds a 12.5% stake in the pipeline, tumbled further on Tuesday morning, having already seen its stock fall by 65% since the start of the year. Meanwhile the Eastern Mediterranean Gas Company, which is charged with operating the pipeline, said it would be seeking more than $8bn (£5.1bn) in damages from the Egyptian government over the repeated disruptions.

But experts suggested that the long-term economic impact on Egypt would not be too great. “It will certainly have a short-term effect on the balance of payments, because the government is now not going to get the gas revenues they had been expecting from Israel and Jordan,” said Simon Kitchen, a strategist at Egyptian investment bank EFG-Hermes.

But he pointed out that last year gas exports to Israel and Jordan through the pipeline totalled only 5.46bn cubic metres, a figure dwarfed by the almost 10bn cubic metres of liquefied natural gas that Egypt exported via tankers to Europe and elsewhere. “Israel and Jordan, especially the latter, rely on this gas heavily,” added Kitchen. “For Egypt the money is nice, but it’s not absolutely critical.”

Photo: The Egyptian ( Arab Gas Pipeline) gas pipeline exports Egyptian natural gas to Jordan, Syria and Lebanon, with a separate line to Israel. It has a total length of 1,200 kilometres (750 mi) and was constructed at a cost of US$1.2 billion.