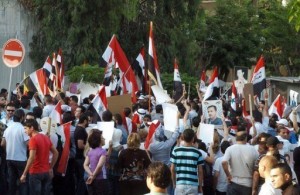 Syrian government supporters stormed into the American Embassy compound in Damascus on Monday and vandalized the building, according to news reports and images posted online.

Some of the men in the demonstration scaled the high fence around the embassy, smashing windows and draping a Syrian flag over part of the facade, images showed.

In a separate but apparently coordinated attack, government supporters also tried to enter the French Embassy in Damascus, the capital. Guards there fired shots into the air to disperse the crown, news agencies reported.

There were no deaths or injuries reported inside either embassy. News agencies said the men who breached the American embassy had left.

The attacks escalated the angry demonstrations that have been mounted outside the two embassies for days by protesters loyal to President Bashar al-Assad. Mr. Assad has objected publicly to visits last week by the French and American ambassadors to the city of Hama, a focal point of the popular uprising against his government in Syria.

Over the weekend, some angry men threw eggs, tomatoes and rocks, causing some damage to the American embassy. The ambassador, Robert S. Ford, criticized the Syrian government for not doing more to protect the embassy, as international law requires. Mr. Ford, who was reportedly was present at the embassy during the attack, said the government appeared to take a very different approach to pro-government demonstrators than it had in four months of brutal crackdowns on antigovernment marchers.

“How ironic that the Syrian Government lets an anti-U.S. demonstration proceed freely while their security thugs beat down olive branch-carrying peaceful protesters elsewhere,” Mr. Ford wrote in a message posted on Sunday on his Facebook account.

Graffitti appeared on the walls of the embassy after the attack on Monday called Mr. Ford a “dog,” witnesses told news agencies.

Mr. Ford was greeted warmly durinhg his visit to Hama, a trip the State Department described as a show of solidarity with residents of the defiant city who have mounted a sharp challenge to Mr. Assad’s government in recent weeks.

On Friday, tens of thousands of people gathered in Hama, the site of a 1982 massacre. Activists called the gathering the biggest since demonstrations started in mid-March.

Mr. Ford had previously participated in a government-organized tour of the town of Jisr al-Shoughour in northern Syria, after murky reports of clashes there that left dozens dead.