MP Daher tells Mikati: The choice is between Justice or injustice

March 14 MP Khaled Daher said that Prime Minister Najib Mikati has to choose between justice or injustice …by either severing his government’s relations with the Special Tribunal for Lebanon (STL) or by “rescuing the country” from attempts to obstruct justice.

“Mikati is dealing with two conditions: to either submit to the conditions of the March 8 coalition or save his country from its scenario to obstruct justice,” the MP said Wednesday morning during the second day of parliamentary session aimed to debate the ministerial policy statement of newly-formed government.

He also praised the Syrian people who are revolting against their regime and calling for “freedom and democracy.”

“We call for the respect of the Syrian people’s choices,” al-Daher said, adding that supporters of the Syrian regime in Lebanon that are seeking to harm the people of the neighboring country should be silenced. 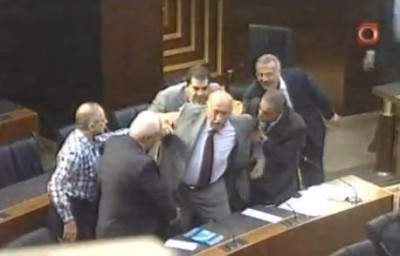 Daher’s comment about Syria enraged MP Assem Qanso a staunch supporter of the Syrian regime and reportedly wanted to start a fight with Daher, but Speaker Nabih brought order to the session