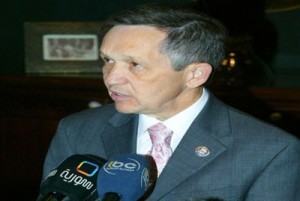 U.S. Rep. Dennis Kucinich showed up in Syria this week and held a press conference in which he appeared to praise embattled Syrian President Bashar al-Assad – who is ruthlessly crushing opposition to his government – as “highly loved and appreciated by the Syrians.”

The Ohio Democrat released a statement on Tuesday saying that he had been misquoted by Syrian media.

Kucinich was originally spotted in Damascus by CNN correspondent Hala Gorani, who tweeted on Monday that she had bumped into the eight-term congressman. “Ran into Dennis Kucinich in another hotel,” she wrote, also noting that Kucinich had met with Assad for three hours.

State Department spokeswoman Megan Mattson said Kucinich visited Syria at the invitation of its government, and was not there as an an official U.S. government representative. Kucinich’s press spokesman did not respond to inquiries on what Kucinich discussed with Assad or who financed Kucinich’s visit.

Syrian state media quoted Kucinich as saying during the press conference, “President Bashar al-Assad cares so much about what is taking place in Syria, which is evident in his effort towards a new Syria and everybody who meets him can be certain of this.”

Assad is currently under intense international pressure for his regime’s brutal handling of the pro-democracy uprising that has sprung up in the country as a consequence of the broader Arab Spring protests. Opposition figures estimate that some 1,400 people have been killed as a result of government crackdowns on street demonstrations.

Kucinich released a statement on Tuesday alleging that Syrian media had mischaracterized the statements that he made in Damascus.

“A story written about my remarks by the Syrian Arab News Agency unfortunately mistranslated several of my statements and did not reflect my direct quotes. Arab-speaking friends accompanying me have explained that the problem may have come from a mistranslation as well as the degree of appreciation and affection their state-sponsored media has for President Assad,” Kucinich said in the statement.

However, the Ohio Congressman did not rush to blame Syrian state-run media, saying in the same statement that the mistranslations were “unfortunate [but]… not a willful intent to mischaracterize my statements or my efforts in the region.”

Some have pushed back on Kucinich’s explanation for the quotations. Foreign Policy writer David Kenner notes that Kucinich does not speak Arabic, and that since the original Syrian news article was in English, no translation would have been necessary.

Kucinich’s comments come the same week as the Republican chairwoman of the House Foreign Affairs Committee, Rep. Ileana Ros-Lehtinen, called for the U.S. Ambassador to Syria to be recalled. The State Department has maintained that having an ambassador in the country continues to be valuable.