Analysis: Syrian opposition divided over how to achieve change

by yalibnan
2571
Syria's opposition, weakened by half a century of oppression under the Baath party, is united in demanding change but divided over how to achieve it.
Share: 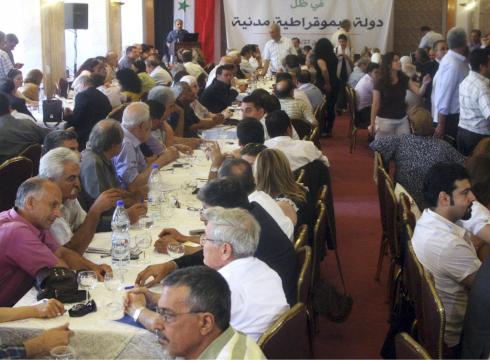 Beirut, Lebanon – Syria’s opposition, weakened by half a century of oppression under the Baath party, is united in demanding change but divided over how to achieve it.

Some believe the street protests which erupted three months ago, the most serious challenge to the 11-year rule of President Bashar al-Assad, can overthrow him and bring democracy and freedom to the Arab country.

Others insist that without dialogue with the authorities to agree on reforms and a period of transition away from autocracy, the country faces a dark future, including possible civil war.

Divisions came to the fore this week when the leadership granted a rare public platform to the opposition in Damascus. It let them articulate demands but also exposed a rift between those taking part and other activists, many in exile, who called it pointless while security forces were still crushing protests.

“We are definitely with the dialogue. We do not think there is anything else capable of solving the crisis in Syria,” said Fateh Jamous, who spent some 19 years in jail as a dissident.

“But before the dialogue we need some practical moves on the ground … so that the side which is holding talks does not look like it is doing that against the popular movement,” he added, speaking by phone from Damascus.

Other opposition figures believe Assad has already squandered opportunities for reform, saying it is too late for the national dialogue he has promised and he must leave now.

“This regime has lost its legitimacy. I do not see any reason in talking to it. He must go and we will choose our way after him. He must go first,” said one secular activist in Damascus, who asked not to be named for his own safety.

Even many who believe in dialogue say they cannot talk with the authorities while the crackdown on protesters continues.

“What we want is a democratic change in the structure of the regime, which means changes in laws, institutions — all the issues of the past 40 to 50 years to be dealt with,” said Jamous, a senior official of Syria’s Communist Labor party.

Louay Hussein, a writer who was detained during this year’s protests and took part in the opposition conference in Damascus on Monday which called for democratic change, said authorities must prepare the right atmosphere for talks.

“Before any dialogue all detainees must be released, the crackdown must end, and the opposition must be allowed a voice in state media,” he said.

Western governments have condemned Assad’s violence against protesters, but their practical response has so far been limited to sanctions against top officials, a far cry from the military intervention against Muammar Gaddafi in Libya.

Assad’s response to the protests has also included steps toward reforms, including granting citizenship to some ethnic Kurds, lifting a draconian state of emergency, freeing hundreds of prisoners and calling for a national dialogue.

Protests, triggered by anger and frustration at corruption, poverty and lack of freedoms, have been mainly peaceful, though rights groups say the death toll among protesters is over 1,300 and that 12,000 people have been detained.

Assad’s adviser Bouthaina Shaaban said on Tuesday that 500 soldiers and police had been killed. Activists say that at least some of the dead soldiers were killed by their own superiors for disobeying orders to stop protests.

Syria has imposed restrictions on media, including expelling journalists, making it hard to verify accounts of violence.

Although the secular opposition shared a common goal of democracy and opposes foreign intervention, years of oppression under Assad’s late father, Hafez al-Assad, have fragmented this loose grouping of liberals, Arab nationalists and Kurds.

A high-profile alliance which in 2005 produced what it called the Damascus Declaration calling for peaceful reform has done little as a group since this year’s protests broke out.

Operating largely separately has been the banned Islamist Muslim Brotherhood. Dominated by exiles since the elder Assad crushed an armed revolt by the group in the city of Hama in 1982, it still has potential to be a major force among those in the Sunni majority keen to throw off domination by Assad’s minority Alawite sect. Membership is still punishable by death.

Most veteran opposition figures have spent years in prison. Many have been jailed several times.

In the past year, Syria’s intelligence agents have worked tirelessly to divide the various opposition groups, playing on their rivalries to plant seeds of doubt among them and leaving a legacy of suspicion still evident in their responses to an uprising that seems to have started as a spontaneous reaction among ordinary people to the overthrow of other Arab leaders.

When the Syrian protests erupted in March, triggered by local grievances in the southern city of Deraa, the disparate opposition failed to take a lead, leaving the way open for a new form of activism, inspired by Egypt’s successful revolution.

Young people set up local coordination committees which were active on the streets, made contact with media organisations banned from reporting in Syria and made use of mobile phone footage and social media to promote their cause.

“The street opposition was born and is now playing the main role in calling for the change,” said Aref Dalila, a prominent economist and activist who spent years in prison. He dropped out of this week’s meeting in Damascus at the last minute.

The conference won a guarded welcome from Assad’s toughest critics in Western governments, but another prominent opposition figure in Damascus who refused to take part said it might have helped polish the authorities’ image and harmed their opponents.

“We feel it might have been used … to minimize the extent of opposition and to suggest it was limited only to those who came to the meeting,” said the man, another formerly jailed dissident.

Despite three months of street demonstrations, in which tens of thousands have braved violence to challenge Assad’s rule, most of the 22 million Syrians have stayed on the sidelines and the main cities of Damascus and Aleppo have seen fewer protests.

While Assad’s promise of dialogue is unlikely to sway the committed protesters it might send a positive signal to the “silent majority” which has not taken to the streets, either from fear of repression or concern about chaos if Assad goes.

Fayez Sara, a liberal writer who attended the meeting in Damascus, said it had been an important achievement which helped bring different views together. He hoped it could be repeated in the provinces: “(It was a) breakthrough in the work of the opposition, which has been deprived of meeting and organizing events for the past 50 years,” said Sara.

It was not the first time this year an opposition conference has been met with skepticism. When a group of activists and opposition parties met in Turkey last month critics among their fellow Syrian dissidents described it as an attempt to encourage foreign powers to intervene in their country.

That exposed another fault line in opposition ranks, between activists in exile who have been lobbying the international community to make a stand against Assad, and those still in the country who mostly insist that Syrians solve their own problems.

“The opposition outside does not represent us at all. We are against any external intervention, because we believe it will only be motivated by interests and political forces which have a different view from those within the nation,” said Jamous.

Some activists who favor dialogue with Assad said they have come under pressure from others who question their loyalties.

“Some are saying … ‘you are doing the authorities a favour’ and ‘it is a betrayal of the blood the people have shed in the streets’,” said one man in Damascus, who said he got angry messages on Facebook which all but called him a traitor.

“It is nonsense. In order to save the blood of the people we should talk,” he said. “The sense of responsibility is still weak among many opposition groups. Some fear the intimidation, and they are doing nothing because they fear that this or that person will say something bad about them.”

His views were echoed by several activists across Syria.

Many stressed the country’s potentially volatile religious and ethnic mix as a powerful reason for promoting dialogue, to reduce the risk of violence from any sudden shift in power.

Analysts say that communities of Sunni Muslim Arabs — by far the biggest group — Kurds, Alawites and Christians, could slip into civil war as Assad increasingly relies on his fellow Alawites, both regular and militia forces, to hold on to power.

“I think now the crisis is heading toward a dangerous road and I hope that it will averted,” Jamous said. “All sides should make compromises: the regime, which is responsible for what is happening, and the opposition and those elements on the street which have called for the overthrow of the regime without thinking of the alternative and how to fill the vacuum.

“We want a transitional period during which safe and transparent elections take place.”