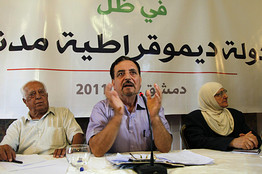 Syrian opposition members met Monday in Damascus, the first such gathering sanctioned by the government, but activists abroad rejected the move, signaling that President Bashar al-Assad’s offer of a national dialogue could widen divisions within the opposition.

The meeting, which discussed a political transition to democracy from the four-decade rule of the Assad family, was the first of its kind to gather opposition activists in a public venue, attendees said. It appeared to show the scope for political conversation that more than three months of street protests have forced on Mr. Assad’s regime.

In a closing statement, participants said they supported the popular uprising, and identified themselves as independents without the intent to act as a substitute for other opposition members.

“The meeting calls on coordinating the opposition with the popular street movement for national, democratic, peaceful change in Syria,” the statement said.

It also rejected foreign intervention and said Arab and international media should be allowed to cover events in Syria. Syria’s government has begun to accredit some members of the foreign media after largely barring them from the country for the past three months.

Antiregime activists, in Syria and in exile, said they had expected the meeting to echo the regime’s line of advocating dialogue as a way out Syria’s crisis, and said it wouldn’t represent street protesters demanding the end of Mr. Assad’s rule.

Opposition members active in coordinating the recent street protests have broadly rejected dialogue with Syria’s government. Some activists in Syria say they will refuse discussions as long as tanks and troops are used to quell protests, but may reconsider once the violence against protesters, which is estimated to have killed over 1,400 people, stops.

“There was some confusion between this conference and the ‘national dialogue’ the regime has called for, though I believe this meeting was independent,” and not a government initiative, said Aref Dalila, an opposition figure in Damascus who didn’t attend the meeting.

Syrian state-owned media covered the gathering. The state news agency reported “a number of Syrian opposition and independent figures…discussing the current situation in Syria and means for overcoming the crisis.”

Louay Hussain, one of the organizers, said some 200 intellectuals and writers attended.

The Damascus meeting followed a flurry of opposition activity abroad over the weekend. Young activists leading the online effort to document the protests convened a conference in Istanbul to discuss support strategies for protesters, while others arrived in Moscow on Monday on a lobbying tour for international support. Antiregime activists also met in Doha, Qatar, on Monday and other delegations planned to head to South Africa and Brazil, activists said.

Syria’s government continued to extend an offer of national dialogue as the only way out of the crisis. On Monday, it set July 10 as a date for a consultative meeting to prepare for a “National Dialogue Conference.” A date for the conference itself hasn’t been set.

“There are no alternatives to political discussion and allowing all Syrians to participate in building a democratic, plural society that meets the aspirations of the Syrian people,” a government statement on Syria’s state news agency said. The statement saidall intellectuals and political figures are invited to attend the conference, which will discuss draft electoral and media laws as well as amendments to the constitution, including an article that gives the ruling Baath Party a monopoly over state and society in Syria. That article has been a longtime focal point of opposition activists seeking political change.

In a speech a week ago, President Assad said the government would seek out 100 people as interlocutors for the national dialogue.

“I think the people meeting today are grooming themselves to be a part of that, but they are independents so they don’t represent any of the main opposition fronts and coalitions,” said Anas al-Abdah, London-based head of the Damascus Declaration opposition group’s “abroad chapter.” The group, one of Syria’s best-known opposition groups, boycotted Monday’s meeting as it “convenes with the agreement and consent of the Syrian security services,” Mr. Abdah said.

He said the regime will use the conference “to portray its own picture of the dialogue, while actually raising issues that might divide the opposition,” adding, “It’s basically a chance to divert attention from the violence on the ground.”

Protests continued across Syria over the weekend. At least 16 people were killed on Friday as security forces opened fire on large protests, according to the Local Coordinating Committees, a nationwide network of activists. On Monday, the group said 304 students from Aleppo University were referred to a court for investigation of their participation in campus protests. Videos posted on YouTube showed dozens of medical students marching Monday in white coats in the central city of Hama.

Photo: Munther Khaddam (C), Hanan Laham (R) and Shawki Baghdadi head one of the sessions of Syrian opposition intellectuals during a meeting held in Damascus, under the title “Syria for all in a democratic civil state”.