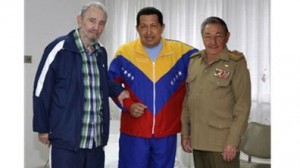 Hugo Chávez extended stay in a Cuban hospital is because he is in critical condition, according to a report in El Nuevo Herald.

The Venezuelan president, who was last seen in public June 9 and last heard from on June 12, on a phone call with Venezuelan state television, was said to have been treated for a pelvic abscess in Cuba.

During the call Chávez said that medical tests showed no sign of any “malignant” illness.

But according to the report in El Nuevo Herald, Chávez finds himself in “critical condition, not grave, but critical, in a complicated situation.”

Chávez silence has led to chatter and speculation in Venezuela that the socialist leader is actually suffering from prostate cancer. Intelligence officials could not confirm a diagnosis of prostate cancer but Chávez family did go to Cuba in the last 72 hours, according to wire service EFE.

Chávez daughter Rosinés and his mother Marisabel Rodríguez “urgently” left the country and headed to Cuba in a Venezuelan air force plane.

Cuba’s state media website, Cubadebate, released photos on June 17 that showed Chávez posing with Fidel and Raul Castro in his hospital room. Chávez smiled for the camera in a track suit, while a frail-looking Fidel clutched Chávez arm.

Before the report that Chávez was in critical condition, his brother sought to reassure Venezuela that he was recovering well.

“In response to all the rumors, I can give faith that the president is recovering in a satisfactory manner,” Adan Chávez, who is a state governor, told state television Wednesday. “The president is a strong man.”

Adan Chávez added that “it’s not clear” when his younger brother would return home, but said the president is expected to leave Cuba within 10 to 12 days.

Possibly to stave off rumors of bad health, Chávez personal Twitter account went active on Friday, for the first time in 20 days.

“I’m here with you during the hard battles every day! Until victory always! We are winning! And we shall win!” he tweeted in Spanish.